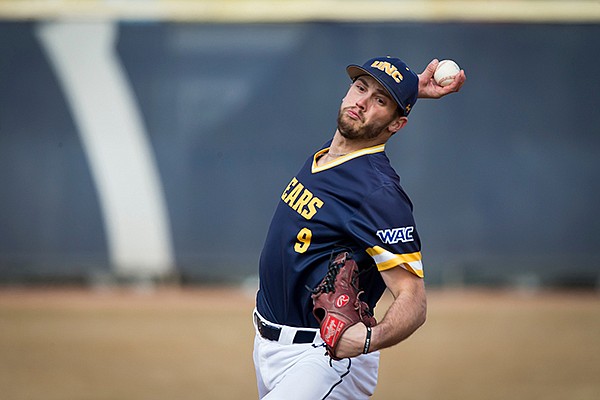 FAYETTEVILLE — Issac Bracken, a right-handed pitcher from Northern Colorado, will transfer to Arkansas for his final year of college eligibility in 2021.

Bracken (6-0, 195 pounds) has been the Bears’ No. 1 starter for the past three seasons. As a graduate transfer, Bracken will be immediately eligible for the Razorbacks.

He made contact with Arkansas through Northern Colorado’s volunteer coach Shane Opitz, whose younger brother, Casey, has been the starting catcher for the Razorbacks the past two seasons.

“Once I decided to enter the transfer portal, I contacted Shane and was like, ‘Hey, do you see me at Arkansas?’” Bracken said. “He was like, ‘Yeah, I think you’re that caliber of a player.’”

Bracken started four games during the shortened 2020 season and recorded a 3.20 ERA in those outings against Houston Baptist, New Mexico, Boise State and North Dakota State. He had 19 strikeouts and five walks in 25 1/3 innings.

His fastball has been clocked at 94 mph and he also throws a curveball, changeup and slider. He began his college career as a shortstop before he was converted into a pitcher.

At Arkansas, Bracken will join a pitching staff that is expected to include returning starters Connor Noland and Patrick Wicklander, as well as experienced relievers.

“Pretty much what I said (to Arkansas pitching coach Matt Hobbs) was that I would love to earn any key role on the team,” Bracken said. “It doesn’t really matter because I’m a very versatile pitcher. I’ve closed before, I’ve started before, I’ve done mid-relief - I think what’s important to me is to try to find a role on the team to help the team be very successful.

“I know at Arkansas it’s going to be a grind to compete with a lot of really good guys. I do know I’m a hard worker and wherever I go I’ll work my hardest to earn whatever I can.”

Bracken is the second graduate-transfer pitcher with starting experience to announce plans to transfer to Arkansas this offseason. Like Bracken, left hander Lael Lockhart of Houston was the No. 1 starter at his former school.

“I think over the years I’ve really focused on being confident and commanding all my pitches, and throwing every pitch with conviction,” Bracken said. “I think I earned a role on my team where everyone kind of respected me and I could feel that on the mound. I think being respected really helps you perform.”

At Berthoud (Colo.) High School, Bracken was an honorable mention All-American by Perfect Game as a senior in 2016.

CORRECTION: Lael Lockhart was incorrectly identified in an earlier version of this story as a right-handed pitcher. He is a left hander.