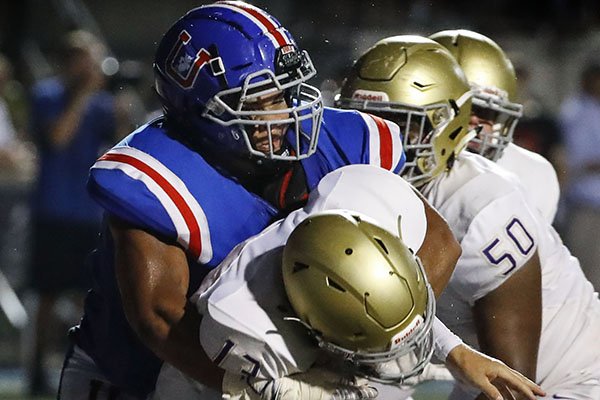 Now may be as good of a time as ever to be an offensive lineman at the University of Arkansas.

Sam Pittman was widely considered among the top offensive line coaches in the country before he was hired as head coach at Arkansas in December, but his arrival not only brings optimism to a unit that battled inconsistency throughout the Chad Morris era, it also gives prospective recruits added incentive to give the Razorbacks a deeper look during the recruiting process.

Henderson At a Glance

NOTEWORTHY Signed with Arkansas despite having numerous offers from other Power 5 programs, including Alabama, Auburn, Oklahoma, Michigan and Ohio State. … Played in the Under Armour All-American game. … Rated as the No. 6 guard in the country and the sixth-best player in Tennessee by ESPN. … Has a clothing line with his sister that he’s expecting to be launched soon.

"Coach Pittman is the real deal, literally," he said. "I had a great relationship with him when he recruited me while he was at Georgia. Then, he went out and hired Coach [Brad] Davis, who recruited me at Missouri and preached to me about that family factor that Coach Pittman brings to the staff.

"The fact that he recruited Coach Davis when he was in high school, then came back and hired him showed that loyalty and belief he had in him. How could you not want to play for him?"

Henderson will experience firsthand how it feels to perform under Pittman's tutelage this fall after signing with Arkansas instead of SEC rival Mississippi during the late signing period in February.

"I'm ready to get up there and go to work," he said. "Things have kind of slowed down for everybody because of the coronavirus, and everything has been pushed around some. We don't really have a set date as to when we're going to get to campus. But I'm still doing the things I need to do.

"I've been able to work out some, like running up a hill that's by a lake that I live close to and doing sprints up the street. I have a little bench press that turns into a squat rack so I do as many reps as I can. The coaching staff is depending on us, so we all have to do our part to try to be as ready as we can be when we get there."

The 6-5, 300-pound all-stater, who along with Ray Curry and Jalen St. John, were three highly sought after linemen in the Razorbacks' 2020 recruiting class who'll strengthen an offensive line that's returning an abundance of players, including four of the five which started Arkansas' final game last season.

"All three of us are pretty close and talk all the time," Henderson mentioned. "Me and Ray had always talked about playing together since we were in middle school. We'd always talk about recruiting and things like that.

"So for us to be playing together in college, along with Jalen, that's a big thing."

Henderson, a four-star prospect by ESPN, was the centerpiece for a Memphis University offensive front that helped produce more than 3,000 yards on the season and averaged nearly 32 points per game. The Owls went 10-2 under longtime Coach Bobby Alston and fell a game short of reaching the Class 3A-II state title game.

Despite his ability to dominate opposing defenders, Henderson also showed his versatility by playing on the defensive side where he was equally as imposing.

That type of skill should mesh well with Pittman's philosophy of having big, strong athletic linemen.

"I've always felt like I was one of the strongest guys whenever I'm in the weight room," said Henderson, who had 22 tackles and two sacks on defense. "I definitely get it done in that aspect, and it shows up on film ... just abusing people. That's what I try to do when I get out there on the field."

Alston noted that Henderson held his own against guys whom he'll see in the SEC, revealing that he won more of those battles than he lost. For that, the high school All-American is eager to show that any clash he lost during his prep career was merely an aberration, but he mentioned that he's going to let his action on the field dictate things.

"For me, I want to get on the field and make an impact early," Henderson said. "I want to contribute right away, but if there's anything I can do to help the team win, I'm going to do it."