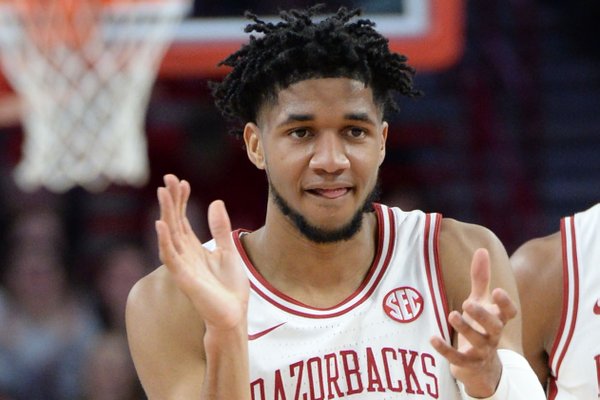 Arkansas guard Isaiah Joe celebrates a 3-point basket Friday, Feb. 21, 2020, during the first half of play against Missouri in Bud Walton Arena in Fayetteville.

The NCAA deadline for underclassmen to withdraw from the NBA Draft and maintain their college eligibility is being pushed back to an undetermined date.

Previously, underclassmen had until June 3 to withdraw from the draft. That was before the NBA announced that it was postponing the draft lottery and combine scheduled for later this month in Chicago.

NCAA Senior Vice President of Basketball Dan Gavitt said in a statement that the modification is being made with the health and well-being of athletes in mind, as well as their ability to make the most informed decisions during an uncertain time.

The new withdrawal date will be made public once the NBA has developed a timeline for the pre-draft process, Gavitt said.

“Working in collaboration with National Association of Basketball Coaches Executive Director Jim Haney and the rest of the coaches’ leadership, the NCAA membership will ensure that any change supports a player’s decision-making process related to professional opportunities while also protecting their academic pursuits and the opportunity to play college basketball,” he said.

Arkansas has one player - sophomore guard Isaiah Joe - testing the draft waters. Joe, who averaged 16.9 points for the Razorbacks in 2019-20, submitted the necessary paperwork to enter the draft on April 20 but did not hire an agent, according to Eric Musselman and Joe’s father, Derrick.

Mason Jones, the Associated Press co-SEC player of the year last season, declared for the draft on March 27 and signed May 1 with agent Richie Felder of Creative Artists Agency in Los Angeles.