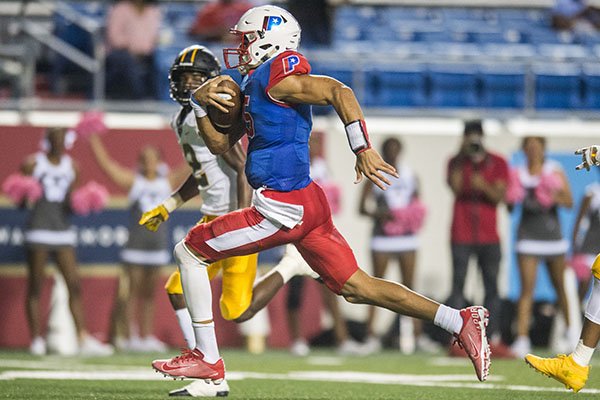 Little Rock Parkview quarterback Landon Rogers (15) runs for a touchdown during a game against Watson Chapel on Thursday, Oct. 10, 2019, at War Memorial Stadium in Little Rock.

Pretty much from the time he stepped foot on campus, new Arkansas head football coach Sam Pittman made it clear his intention was to make in-state recruiting a main priority.

"We're going to hammer the state of Arkansas with all 10 coaches," Pittman said. "...We are the University of Arkansas...If we have two equal players, we certainly want the one from Arkansas to be a part of the university."

Pittman would no doubt love to fill his team with Arkansas athletes, but the state just does not produce enough athletes to field an entire roster.

I'm always reminded of that when I sit down each May and begin research for Hawgs Illustrated's Top 33 prospects.

The 33 is a nod to three of my favorite professional athletes of all time -- Dallas Cowboy Tony Dorsett, Boston Celtic Larry Bird and one-time St. Cardinal Larry Walker.

While this year has been different because of the covid-19 pandemic that canceled spring practice and some camps, it's still been a labor of love.

I've talked to plenty of coaches, writers and scouts to get their opinions, but in the end it's my list and I have to own it whether it pans out or not.

The 2021 list, which will be out near the end of May in our next edition of Hawgs Illustrated, has been taking up a lot of my time the last couple of weeks as I track down evaluations, stats and make differentiations on who should land where.

Wells, Avant and Rogers have pledged to the Razorbacks while Norwood and Outley are uncommitted.

Obviously, one of those is going to end up at the top this year.

Hawgs Illustrated's top prospect in 2020 was Conway offensive lineman Robert Scott, who would sign with Florida State and halting a seven-year run of Arkansas landing the top prospect in the HI's rankings.

In 2019, Pulaski Academy tight end Hudson Henry got the slight nod for the top player over fellow future Razorback Treylon Burks. ESPN had Henry at 51 nationally and Burks at 81.

Burks had the better freshmen year while Henry battled injuries. Both are expected to be big weapons this season for new UA offensive coordinator Kendal Briles.

It was also a close call in 2018 with Greenwood two-sport star and Arkansas football signee Connor Noland, who would later decide to concentrate on baseball, and Earle quarterback and eventual Baylor signee Gerry Bohannon.

It was so close that, even though I despise ties, I couldn't make up my mind and named them both No. 1 with Ashdown defensive back and future Arkansas signee LaDarrius Bishop third.

Looking back at that list, I clearly had Springdale's Isaiah Nichols (7th) and Jonesboro's Noah Gatlin (9th), both current Arkansas players, rated too low.

It's not necessarily based on high school production, although that is a factor, but on how they project as a college prospect.

There always seems to be one player each year who comes out of nowhere and would vault into the rankings if done after the season instead of before.

For Arkansas, it will always be about finding guys with high ceilings instead of potential already reached.

That seems to be what Pittman does best and should give Arkansas fans hope.