'Smart mound' developed in Arkansas might be baseball's next big tool 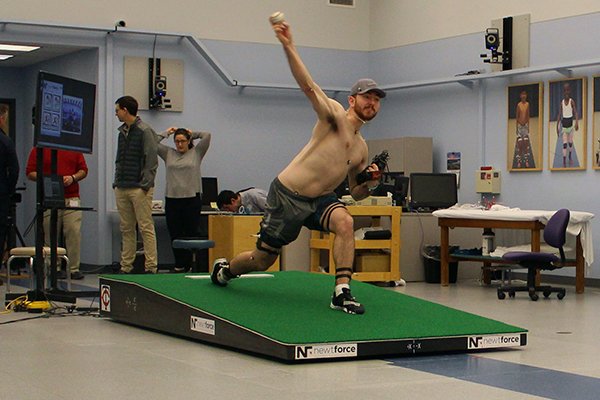 FAYETTEVILLE — Technology that could become central to baseball’s analytics-driven approach is being mined in Arkansas.

It began 3 1/2 years ago, shortly after Wes Johnson was hired as Arkansas’ pitching coach in 2016.

Johnson, whose focus on biomechanics fueled a quick ascent from a small-school head coach in Arkansas to pitching coach of MLB’s Minnesota Twins, felt something was missing in the emerging world of tools he used to teach his pitchers. At the time, the technology focused largely on ballistics - velocity, spin rate, tilt, etc. - and motion capture was becoming better equipped to give a frame-by-frame view of a pitcher’s delivery.

He phoned Kyle Barker, owner of Jacksonville-based NewtForce who was a former classmate of Johnson’s at Sylvan Hills High School. It wasn’t long before Barker, educated in aerospace engineering, was tinkering with designs to answer those questions.

“I think in the beginning we started with some off-the-shelf commercial force plates and could never make that work really,” Barker said. “Ease of use wasn’t there and there were some doubts about the reliability of the data.”

There were plenty of missteps early on, Barker said. His big breakthrough came when he stumbled upon some testing at his company’s laboratory in Tulsa.

“Some of the technology we were using in some of the aviation testing we were doing, there were some overlapping applications there,” Barker said.

Barker’s persistent work resulted in the “smart mound,” a 10-foot long, 5-foot wide, turf-covered piece of equipment that weighs 150 pounds and has a regulation downward slope. Beneath the surface are force plates that are measuring the pitcher’s movement at any given point in his delivery.

That data, as well as images taken from a high-speed camera nearby, are recorded onto synched computers being monitored by a coach and/or one or more analysts.

It is technology that Barker feels will become a staple in pitching labs for years to come, similar to today’s popular products like TrackMan and Rapsodo, machines that track pitch movement.

“In 10 years, whether it’s our product or someone else’s, (a force-measuring mound) will be a baseline metric and kids will grow up on it, then they will go off to be coaches,” Barker said. “I think the foundation is laid and it’s unavoidable.

“Baseball is probably 20 years behind golf if you think about it. A guy like (pro golfer) Rickie Fowler has a lab at his house that includes a TrackMan portable unit, he’s got force plates, motion capture and he’s been doing that for probably 15 years now.

“Golfers have gotten better and technology has gotten better, and now they’re having to re-design courses to try to slow down the birdie parade. It’s the same thing in baseball. I just think these guys are more well-rounded athletes and the coaches aren’t guessing. They now have the tools to really understand what’s going on and how to get better.” 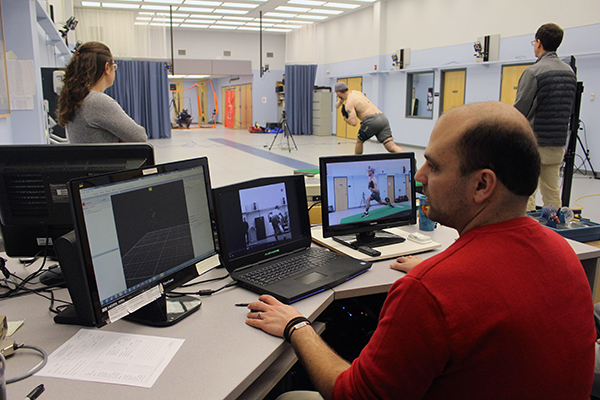 Research engineer Matthew Solomito analyzes data as Central Connecticut pitcher Michael DeLease throws off a smart mound at the Center for Motion Analysis in Farmington, Conn. on Tuesday, Jan. 28, 2020. Computers synced to the smart mound device give analysts an instantaneous look at the data being recorded. (AP Photo/Pat Eaton-Robb)

Naturally, Arkansas was the first team to use the smart mound. Now the mounds can also be found at Vanderbilt and TCU, as well as at the spring training facility for the Minnesota Twins in Fort Myers, Fla., and at the Florida Baseball Ranch, a workout facility in Lakeland.

A separate, flattened force-measuring device is also being used by some hitters and catchers.

“We’ve gotten a lot of traction with catchers,” Barker said. “There are some who think the forces they generate on a throw to second or third (base) is as important as a pitcher. I probably wouldn’t argue with them.”

With each use, Barker’s team is collecting valuable feedback.

“I couldn’t have been more wrong about what (data) I thought would matter,” Barker said. “In between pitches you get a chart and embedded video, and the coach can sit there and roll the cursor back and forth and look at the force and where the pitcher is in his delivery sequence. At any time, any frame in that video they can see where the forces are.

“Maybe it’s because I’m a goofy engineer, I always thought the most benefit would come from the analysts and their interrogation of the data, because there are things the human eye just can’t see. At least so far, that’s completely opposite of what’s true. (Coaches are) getting immediate feedback and they’re able to change a pitcher’s delivery at the unit in between pitches. I had no idea they would be able to do that.”

One such instance was last fall when Arkansas pitching coach Matt Hobbs was working with pitcher Connor Noland. A right hander, Noland was experiencing an issue with his back foot slipping during his delivery.

The smart mound data showed that he was generating less force with his back leg, and less force equaled lower velocity.

“It was an a-ha moment, I guess you could say,” Noland said. “It was really useful in developing velocity this offseason.

“You could see what was happening at each point throughout the pitch - the drive, the follow-through, so it was really good to be able to visualize and see that stuff.”

During the offseason, Noland was throwing his fastball an average of 3.3 mph faster than he did during his freshman season in 2019.

The velocity increase was evident during his abbreviated sophomore season this year. Noland struck out 19 batters in 18 innings, including 11 in an opening-day win over Eastern Illinois.

The minute details like Noland’s back leg placement are where technology becomes so beneficial, Hobbs said.

“The only thing that really matters is how I coach the pitchers with that technology,” Hobbs said. “It’s not about using all of it for everybody all the time, it’s about maybe trying to identify the one piece of information that might help one of the pitchers.” 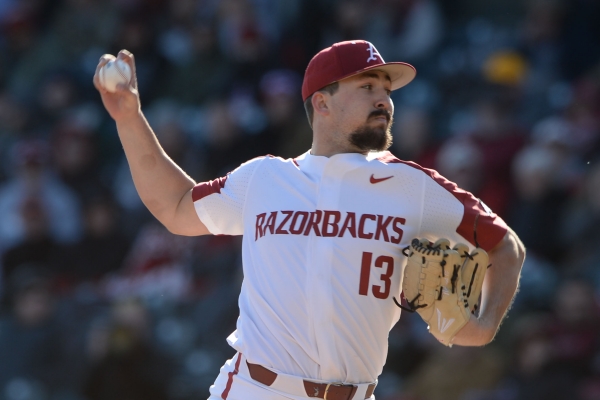 Connor Noland gained valuable feedback from the Razorbacks' smart mound in the offseason, then struck out 11 on opening day. (Northwest Arkansas Democrat-Gazette/Andy Shupe)

Barker grew up a fan of Arkansas’ sports teams - he was a college student in Fayetteville before transferring to Texas-Arlington - and relishes in being able to develop front-line technology that can benefit the Razorbacks. When Arkansas’ $27 million Hunt Family Baseball Performance Center opens next year, Barker hopes it will be home to the first wireless version of his smart mound.

“Right now we’ve got hard wires between processors and mounds and sensors and laptops, and it looks like a freaking NASA control center,” Barker said. “It’s not very sexy or elegant.”

Hobbs said the ability to go wireless with some of the equipment will be ideal because it will allow pitchers a more natural feel during their workouts.

When Johnson left Arkansas for the Twins in November 2018, Hobbs inherited the tools he had been using, including the force mound. Hobbs has come to love the device, but it took some learning to get to that point.

“The first time I met Hobbs he had a real pointed, direct question,” Barker said. “He was like, ’This is great. We were trying to get there at Wake (Forest). But Kyle, What do I do with it? Tell me what to tell Connor Noland to throw a better fastball.’ I just stood there like, ‘I don’t know.’

“He wasn’t hot on it, but to his credit he could have moved onto some other technologies, but he really dug in and went to work and expanded the envelope.”

Hobbs collaborated with the NewtForce engineers to improve the operating system. A key suggestion to the engineers was to synchronize cameras with their smart mound.

“We took (Johnson) data but he didn’t have the synchronized video,” Barker said. “So we were counting on him to figure out what was happening with the body. He was almost guessing and shame on us for thinking anybody could do it.”

The smart mounds now come with a video camera that typically sits on the pitcher’s open side - for a right hander, toward third base - and Barker hopes to develop a multi-view option with as many as three cameras in future models.

“Coach Hobbs is all about motion capture and he knows what to do with it,” Barker said.

Whenever it is time to make software or hardware modifications to the mound, a team from NewtForce drives to Fayetteville, loads the device in a trailer and takes it back to their Jacksonville office.

“It’s very beneficial,” Hobbs said of the proximity. “Kyle Barker is a phenomenal person inside the game. If they go all in on this company, I think it changes the way people deal with pitchers the next 10 years. It’s a really great way to train.”