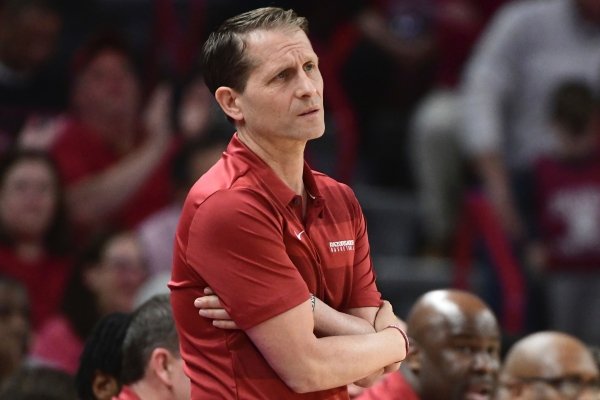 Arkansas coach Eric Musselman reacts on the sidelines against LSU during the first half of an NCAA college basketball game Wednesday, March 4, 2020, in Fayetteville, Ark. (AP Photo/Michael Woods)

Arkansas and coach Eric Musselman have made the cut for ESPN top-20 prospect Kendall Brown.

Musselman and assistant coach Clay Moser, a Minnesota native, did a virtual tour with Brown on May 1.

ESPN rates him a 4-star prospect, the No. 4 small forward and No. 19 overall recruit in the nation for the 2021 class.

He played this past season at Sunrise Christian Academy in Kansas after playing his sophomore season at East Ridge High School in Woodbury, Minn. He averaged 17 points per game.

Brown’s father played basketball at Southwest Missouri State and professionally in Europe and South America. He also played for the Harlem Globetrotters.