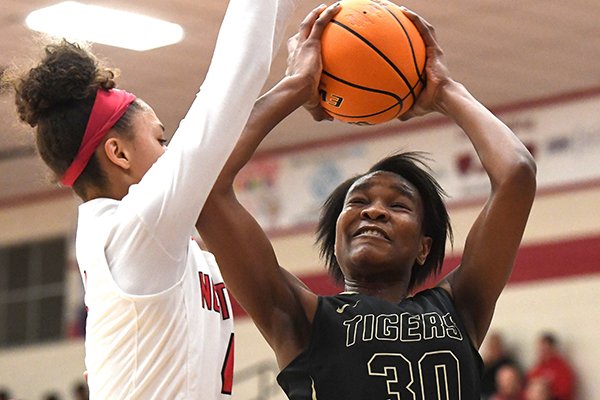 Bentonville’s Maryam Dauda, one of the nation’s best post players in the class of 2021, has committed to Baylor.

Dauda, 6-4, picked the Bears over Arkansas, Tennessee, UCLA, Missouri, Texas and others.

Originally from Nigeria, Dauda moved to the U.S. in the sixth grade. She visited Arkansas coach Mike Neighbors and his program a handful of times.

Baylor made an in-home with Dauda during the 2019-20 season.

Prospects Nation rates her the No. 3 post player and No. 36 overall recruit in the country.

“Dauda hit the circuit last summer like she was shot out of a cannon,” said Prospects Nation analyst Chris Hansen. “I don't know what changed from April to July, but she was one of the most impactful underclass bigs in the country last summer. She can rim run, score on the block, block shots and operate out of the high post. She's a unique front-court talent.”

Dauda is one of two 5-star senior prospects in Arkansas in the girls' 2021 class, according to ESPN. Fort Smith Northside guard Jersey Wolfenbarger committed to the Razorbacks last month.