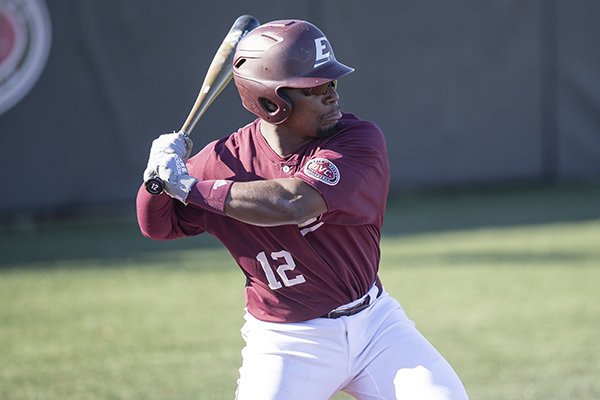 FAYETTEVILLE — A.J. Lewis, a graduate-transfer catcher from Eastern Kentucky, has signed to play his final season of college baseball at Arkansas.

Lewis (5-10, 195 pounds) chose Arkansas over interest from LSU. He is the second catcher to transfer into the Razorbacks’ program this offseason, joining San Francisco graduate transfer Robert Emery, a former summer teammate of Lewis' in the Cape Cod League.

“When I was leaving Eastern Kentucky, I was looking for a program where I could have a shot to win a national championship,” Lewis said. “My good friend Robert committed and was kind of like, ‘Dude, let’s do this together,' explaining that we would both be in a solid situation and this would be a good spot for both of us, and I thought the same."

Emery and Lewis will be immediately eligible next year when Arkansas is expected to need to replace two-year starting catcher Casey Opitz, who is a prospect to be taken in this year's shortened MLB draft. Lewis called himself a "versatile player" who can also play second and third base, or in right field.

Lewis earned a fifth year of eligibility and Emery a sixth year when the NCAA restored eligibility to players whose 2020 season was lost because of the covid-19 outbreak.

He had a .541 on-base percentage and was slugging .843 when the season was suspended in March.

Lewis, who is from Chicago, began his career at Missouri. He played sparingly as a freshman at Mizzou in 2017 and transferred to Logan (Ill.) Community College.

"You see the culture there (at Arkansas), you see how they’ve been the last two years, how the hitters have progressed, how the pitching staff has been among the top in the country," Lewis said. "I went to Missouri my freshman year. Being able to follow up at Arkansas, which was our rival, like our big brother that we could never really beat, it was something that was very important to me and something I value at this point."

Arkansas has added at least four graduate transfers to its roster this offseason. In addition to Lewis and Emery, the Razorbacks have signed Houston left-handed pitcher Lael Lockhart. Northern Colorado right-handed pitcher Issac Bracken has committed but not yet signed.

In addition to the graduate transfers, the Razorbacks have signed infielder Brady Slavens from Johnson County (Kan.) Community College. Slavens began his career at Wichita State.