King: When it comes to playoff, Clemson a safer bet than any SEC team 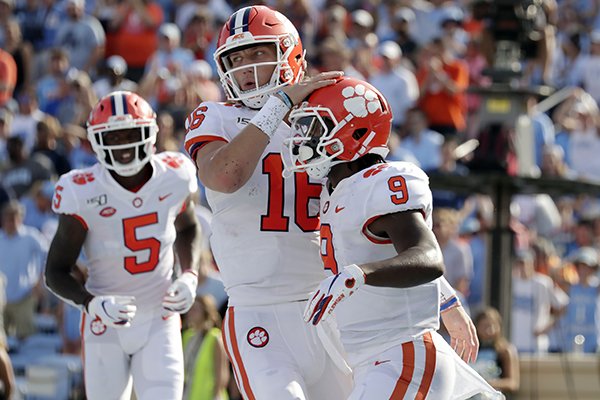 Horseplayers labeled “Bridge Jumpers” for good reason place huge show bets in pursuit of a small profit, but their investments are sound vs. a wager on Clemson at odds of 1-15 to win the Atlantic Division of the ACC.

Contemplate the return on the Tigers in light of a 2-1 favorite at Oaklawn Park returning $6 for a $2 win bet. Netting the same $4 on Clemson requires a $60 investment.

Not even somebody with money to burn would plunk down the cash unless they were purchasing a souvenir.

Football bets are independent, unlike pari-mutuel wagering where each payoff is based on the number of winning tickets in that particular pool.

For example, a few years ago, favored Motovato had never finished worse than second in nine races at Calder Race Course in Florida and attracted an overwhelming portion of the show pool — about $190,000.

Like Motovato, Clemson, which had its 28-game winning streak ended by LSU in the national championship game, deserves to be short odds.

After all, Clemson quarterback Trevor Lawrence and Ohio State’s Justin Fields are such heavy favorites to win the Heisman Trophy that Georgia’s Jamie Newman and Oklahoma’s Spencer Rattler are next at double-digit odds. Newman has never taken a snap in the SEC and Rattler threw 11 passes as a freshman.

In addition, the Clemson schedule is easy.

Co-second choices in Clemson’s division are 14-1 while the Tigers play only Virginia among the three Coastal Division favorites at 5-2 or less.

Outside Clemson, the only ACC teams likely to be ranked in the preseason Top 25 are Virginia, Miami and North Carolina, leaving Notre Dame in early November as Clemson’s only other opponent attracting national attention.

Ironically, North Carolina and Virginia play Top 25 teams from the SEC — the Tar Heels vs. Auburn and the Cavaliers vs. Georgia.

In addition to the schedule, Clemson has a big recruiting edge on ACC teams with a half-dozen five-star athletes and 24 four-stars signed the past two years. None of the four teams that had the second- and third-ranked ACC recruiting classes those years signed a single five-star athlete or come close to the Tigers’ number of four stars.

Consider Clemson’s schedule vs. the SEC members where all 14 teams play a minimum of two preseason Top 25 teams simply because of the quality in both divisions:

—Ole Miss is the leader with a half-dozen — four from the Western Division, plus Florida and Baylor.

—Alabama will have six unless the Pac-12 follows through on talk of playing a conference-only schedule and the Crimson Tide loses the season opener against USC.

—Both Arkansas and South Carolina will join the club if Tennessee is ranked. The Razorbacks have four Top 25 opponents from the Western Division, the Vols, and Notre Dame while the Gamecocks play A&M and LSU from the West and Clemson, plus East Division opponents.

—Missouri, with Arkansas and Mississippi State, is the only SEC team that does not play a top four team from the West and the Tigers are one of two conference teams with as few as two opponents likely to be ranked. Leaving out Tennessee, the other is Florida with Georgia and LSU.

Odds established by professional handicappers support the theory that the West is much deeper than the East. Alabama is a stout favorite, but Texas A&M, LSU and Auburn are less than 8-1 while Tennessee is the third choice in the East at 10-1. Not surprisingly, Arkansas is the longest shot in the West at 100-1.

—Among the other Power 5 conferences, Big Ten division favorites Ohio State and Wisconsin do not play during the regular season, while Pac-12 South co-favorites USC and Utah meet North favorite Oregon.

All predictions involving a full fall schedule are prefaced by “if,” but Clemson missing out on a sixth straight appearance in the College Football Playoff would be a shock; so, too, more than one of the other teams being a first-time CFP participant.