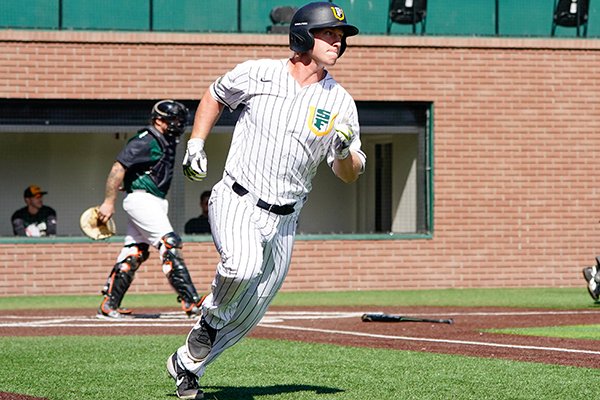 FAYETTEVILLE — A.J. Lewis had just arrived at his host home in Massachusetts last summer when he heard a knock on his door.

Lewis, a catcher from Eastern Kentucky at the time, had taken a red-eye flight into New England and was about 20 minutes into his sleep. On the other side of the door was his summer housemate, Robert Emery, a catcher from San Francisco who was his teammate with the Orleans Firebirds.

"He said, 'Dude we’re about to go to the field. Do you want to go hit?'" Lewis recalled. "From there on we’ve been best friends. That’s my guy."

Lewis and Emery will reunite in Arkansas in 2021 as graduate-transfer catchers for the Razorbacks. Both players, who will be in their final year of eligibility, have signed letters of intent with Arkansas this month after entering the NCAA's transfer portal.

It will give Lewis and Emery a full season together after their time together was cut short last summer. An ankle injury sent Lewis home not long after the summer season began.

“Basically the coach came to him and said, ‘A.J. we’d love to keep you and we’d love to keep Rob, but I need to know how your ankle is going to hold up,'" Emery said. "A.J. was like, 'You know what? I’m not going to push my ankle. I’ve had my success here. I’m going to go get healthy. Rob, I know you’re going to play your best. You stay here and enjoy the summer.’

"He knew playing in the Cape was a life-long dream for me, so that was really what cemented our friendship, just that selfless act was pretty remarkable. You wouldn’t expect that out of just anyone."

Lewis and Emery stayed in contact throughout the offseason, sharing videos of their swings and discussing pitchers they might see in an upcoming game.

Both players got off to a red-hot start. Lewis was batting .451 through 13 games at Eastern Kentucky when the season was suspended in March, while Emery was batting .381 with a 13-game hit streak for San Francisco.

At first it wasn't clear if either would be able to play college baseball again, but they were granted another senior season by the NCAA. Emery will be a sixth-year senior at Arkansas and Lewis will be in his fifth year.

"If you look at our careers in college baseball, it’s a remarkably similar story," Emery said. "We left our first school (Emery at Dartmouth and Lewis at Missouri), had some struggles for sure, both of us. A.J. was hitting .150 halfway through his junior college season (in 2018) and was down in the dumps, turned it around and got a scholarship offer from Eastern Kentucky.

"My sophomore year (in 2018 at San Francisco) I barely played. We both turned that around to successful college careers to this point. Last year we kind of came out of nowhere, played our way to Cape Cod and so we just really grew a friendship by being in very, very similar shoes - going to Cape Cod after not being drafted, trying to sign a free-agent deal, trying to stick around in Cape Cod for the whole summer because we were both on temporary contracts.

"We just became fast friends working out every day, going to the cage every day, eating all of our meals together."

Emery entered the transfer portal first and committed to Arkansas. When he learned the Razorbacks' coaches were interested in Lewis, he encouraged them and Lewis.

"I was like, ‘One-hundred percent we need to get him. We need to bring him in. Love the kid; amazing individual who will give you the shirt off his back. I would 1,000 percent rather have him on my team than play against him at another SEC school.’"

Even with Emery and some existing catchers on the roster, Lewis committed to the Razorbacks over LSU.

"Competition doesn’t scare me," Lewis said. "It brings out the best in me."

And it will reunite a couple of friends for their final year of college baseball.

"It’s a situation for us to get in and make each other better by working out with each other every day and understanding that we’re going to be older guys with one year to prove it for the rest of our career," Emery said, "and try to see how much better we can get and see what we can do in this year together training with someone who has been through it like both of us have.

"It couldn’t have been a better opportunity for both of us to have that relationship and come in and do that together."