Arkansas sweeps up ex-pledge of Tigers 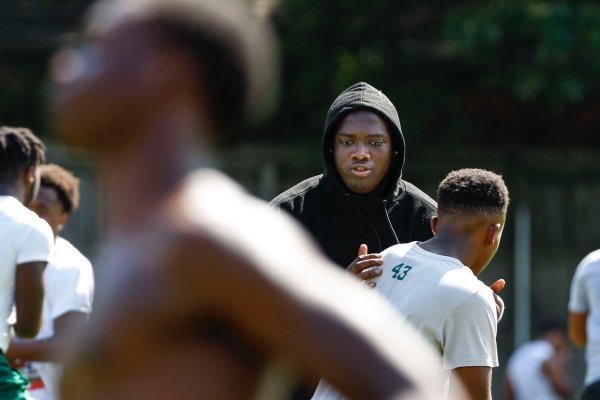 Ray Curry originally committed to Missouri in late spring of last year, but he reopened his recruitment after Missouri cleared out the coaching staff at the end of 2019.

Not even a pandemic can keep Memphis White Station offensive lineman Ray Curry from getting in workouts, but he's also making time for another one of his passions -- cleaning.

"I always get my cleaning on," he said. "I'm not necessarily OCD about it, but a lot of folks don't realize that I really enjoy it. I just like to clean.

Ray Curry at a glance

NOTEWORTHY Earned a three-star rating from Rivals and ESPN. … Signed with Arkansas over 25 other scholarship offers from schools such as Louisville, Missouri, Mississippi State and Auburn. … Led White Station to the playoffs in three of his four seasons.

The seventh in a series featuring newcomers to the University of Arkansas football team.

"I don't know what it is about it. Shoot, I would even try to get my teachers to let me clean their houses for them just for extra credit."

Curry also has intentions on cleaning up defensive lines in the SEC once he takes the field for the University of Arkansas.

The 6-6, 315-pounder originally committed to Missouri in late spring of last year, but he reopened his recruitment after Missouri cleared out the coaching staff at the end of 2019.

Barry Odom was fired as Missouri's head coach one day after leading the team to a season-ending 24-14 victory over Arkansas on Nov. 29. Brad Davis, who was instrumental in getting Curry to commit to the Tigers as the team's offensive line coach, left and was eventually hired Dec. 10 by Razorbacks Coach Sam Pittman. Six days later, Odom was brought on by Pittman as defensive coordinator.

Forty-eight hours after Odom's hiring, Curry signed with the Razorbacks.

"Those guys, they don't care just about football only, but they care about bettering yourself in general," Curry said in reference to Arkansas' new coaching staff. "That was big to me. A prime example of that was Coach Pittman, who coached Coach Davis at Oklahoma and now has him at Arkansas. You can tell relationships and bonds like that are strong.

But not just with those two, but with the entire staff. You can tell they all want to be there."

Curry knew he wanted to be in Fayetteville shortly after making an official visit to Arkansas during that topsy-turvy December.

"Out of all the places I went to, Arkansas was the most genuine out of everyone," said Curry, who was initially offered a scholarship by former Razorbacks Coach Chad Morris before he was fired in November. "Just the people there and the team as a whole. Everything just felt like home to me, and that was one of the main things I was looking for."

Memphis White Station Coach Reid Yarbrough, who spent 10 seasons as an assistant coach with the Spartans before taking over the team last year, believes Curry will fit in nicely with the Razorbacks.

"You're talking about two of the best offensive line coaches in the country in Coach Pittman and Coach Davis," he said. "As a football player, he's long and has a lot of potential to play at that next level. He's a guy that when he showed up on campus as a freshman, we immediately knew he was going to be a good one because we hadn't seen anybody like that at White Station in a long time.

"His size, weight, athletic ability ... that sets him apart. The thing is, he's got a lot of room to grow. He'll learn under their coaching, and his willingness to listen will make him that much better."

The addition of Curry should help an Arkansas offensive line that was pushed around at times last season. One of Pittman's primary objectives when he was hired was to replenish the line in recruiting and by developing returning players. The first-year coach is a fan of big guys in the trenches who can move, and Curry fits that profile.

"The big thing for [Curry] will be to get stronger," Yarbrough said. "At Arkansas, he's not gonna be the biggest guy anymore like he was in high school. He's 18 and will be going up against 21- and 22-year-olds. But with Ray, I like his chances because he's a competitor who wants to put in the work and wants to get better every day.

"Coach Pittman is going to give him that opportunity to compete. The expectation, for Ray, is for him to step up and be ready."

Curry is determined to make sure he's on point when he reports to fall camp.

"I'm going to get it in one way or another," he said, referring to staying in shape. "There's a park close to my house, and I've been running on those hills to help my endurance. I've been working out in my garage, just staying on my toes to be ready.

"I haven't missed a beat really, and I don't plan on it. I'm going to do everything I can to be on that field as much as I can be when I get up there. I'm still going to get some cleaning in, but I'll be ready."