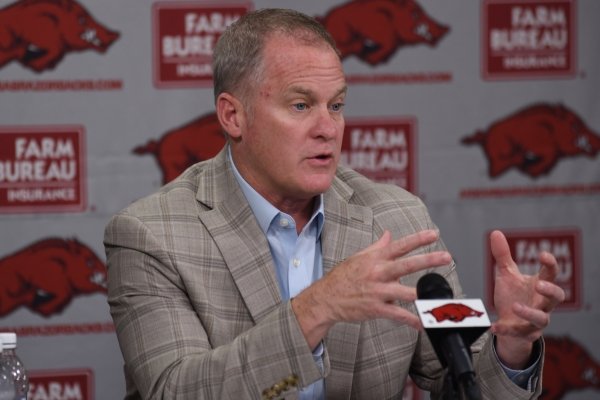 FAYETTEVILLE — All University of Arkansas’ athletic programs exceeded the multi-year benchmark in the latest NCAA Academic Progress Rate (APR) report, but the Razorbacks’ football and men’s basketball teams had single-year scores that could be problematic in the future.

Georgia men’s basketball (922) is the only other program with a single-year score below the benchmark in the SEC’s two most high-profile sports.

When averaged with the last four single-year scores, Arkansas’ multi-year score in football (962) and men’s basketball (958) are above the benchmark of 930.

According to the NCAA, penalties for failing to meet the multi-year benchmark could include coaching suspensions, postseason bans, scholarship reductions and a reduction in practice time.

The Razorbacks’ basketball team had a scholarship taken away for the 2011-12 season after multiple years below the benchmark.

To determine APR, scholarship athletes are awarded points for remaining in school and for being academically eligible each semester. The team’s percentage of points earned in relation to possible points is multiplied by 1,000 to determine the APR rating.

APR scores can be negatively affected by athletes who drop out or transfer while in poor academic standing. Transfers who leave with a 2.6 GPA and enroll at another four-year university by the following semester do not hurt the APR score.

Between December 2017, when Morris was hired, and the beginning of the 2019 season, at least 24 scholarship football players left the Razorbacks’ program, including some for medical reasons. Since the players’ academic status at the time they transferred is confidential, it’s difficult to determine how many transfers negatively affected the APR score.

This is the second consecutive year Arkansas’ men’s basketball team has had a low single-year score. It posted a 918 score in the 2017-18 school year. The team had perfect scores in the preceding two academic years.

During the latest reporting period, at least three scholarship players transferred out of the program. Daniel Gafford also left the program to turn pro. A program's APR score is not penalized for athletes who opt to pursue professional careers, so long as they are in good academic standing.

The APR score in the first year under Arkansas basketball coach Eric Musselman will not be reported until 2021. Musselman’s former team at Nevada posted a 950 multi-year score in the latest report, but was below the single-year benchmark for the second straight year with a score of 922.

Other notable multi-year scores at Arkansas include 971 for the baseball team that played in two College World Series during the reporting period, and 973 for the women’s track program that won three national championships during that time.