When I was hired: Lance Harter finally said yes after years of saying no 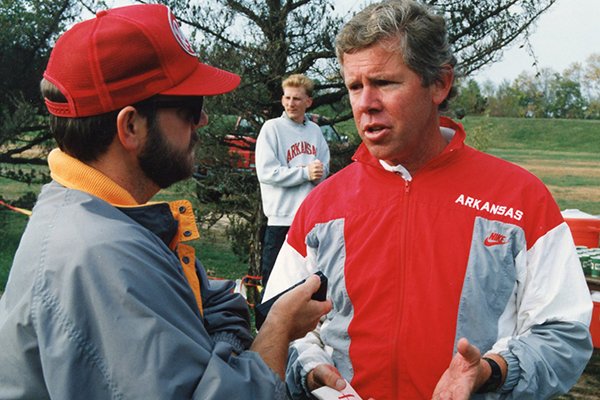 FAYETTEVILLE — Lance Harter spent his 40th birthday preparing not so much for life over the hill, but on top of it at the University of Arkansas.

Harter flew to Fayetteville from his home in California on his birthday, April 15, then spent that night celebrating at the restaurant inside the Fayetteville Hilton on the downtown square.

There were other reasons for celebration that night. After establishing himself as one of the best track coaches in the nation at Cal Poly in Division II, Harter was stepping up in class and would be introduced the following day as head coach of the Razorbacks' women's track and cross country teams.

That was 30 years ago, and he has celebrated every birthday since in the same job.

“We came out in (early) April and did kind of a whirlwind visit and then shot back to Cal Poly to sit down and make a decision,” Harter said. “I had turned down quite a few jobs already, so I knew how to turn jobs down; we had done that prior. After the visit here it was one of those things where it just seemed like, ‘Hey, if I don’t take this job, I’m a fool.’

“My dad at the time said, ‘You know, you’ve won 14 national titles at Cal Poly. What else are you going to do?’ I think that was a big motivator, that you’ve proved yourself.”

This is the second in a multi-part series detailing the backstory to head coaches being hired at Arkansas.

Among the other jobs Harter turned down in the years before coming to Arkansas included head coaching positions at Southern Cal and UCLA in his home state. He had also been a finalist when Terry Crawford got the job at Texas in 1984.

Harter also felt comfortable in the Southwest Conference. He ran for Texas Tech in college and his Cal Poly teams competed well against teams in the SWC. A year before he was hired at Arkansas, his 3,200-meter relay team from Cal Poly won at the prestigious Texas Relays in Austin.

“I thought we could become an impact player right away,” Harter said.

Some of that confidence had to do with a conversation Harter had with Arkansas men’s track coach John McDonnell during the first trip to Fayetteville. By that time McDonnell’s teams had won 11 NCAA and 33 SWC titles in the three sports he coached and were in the midst of the most dominant stretch ever by a college track team.

“The conversation with him was, ‘Hey, if you can do it with the men, can we do it with the women?’” Harter recalled. “His response was, ‘Absolutely.’”

Lewis hired Harter. She coached the 1989-90 cross country and track seasons while also in her first year as Arkansas’ athletics director for women’s sports. (The UA operated separate athletics departments for male and female sports until 2008).

“I had seen what we had done without a lot of funding, a lot of recruiting money across all the women’s sports and without good facilities, and I really felt like we could build a nationally competitive program,” Lewis said. “In track, I had a little bit of success - nothing like Lance had done - but I could see the potential was there if you had the right person.”

Harter said Lewis first approached him about the job the fall before he was hired while at the USA Cross Country Championships, which were in San Francisco that year. Over a meal, Lewis told Harter, “I’m looking for people to apply for this job to take my place, and take this program to another level.”

Because it was so early in her time as AD, it was important for Lewis to make a good hire. It was especially important to Lewis personally, because it had been her program for nine years.

“I only had my sights set on one person,” Lewis said. “Typically when you offer a coach, you give them 24 hours to decide, but I could tell with Lance that he was very calculated and he wasn’t going to make a quick decision. I think one or two other SEC schools had gone after him prior and he didn’t budge.

“I let him take his time and I think he did tons of research. It probably took him about a week, but he finally came for a visit and decided he was coming.”

In a day when shoe companies signed with coaches instead of schools, Harter brought a lucrative Nike affiliation to Arkansas - one of only six women’s coaches with such an agreement. He had also already been named an assistant coach for the U.S. national team at the 1992 Olympics in Barcelona.

“I think it was evidence of the respect he had within the track and field world,” Lewis said. “He was just nationally respected, even being at Division II.”

Hiring someone of Harter’s caliber became even more important shortly after he arrived in Arkansas. He coached Cal Poly through the 1990 outdoor season, then moved to Fayetteville in late July.

On the day the moving truck arrived at his new home, so did Lewis with some surprising news.

“She said, ‘Do you have a tie?’” Harter recalled. “I was like, ‘Yeah, in that truck in front of you is all my clothes.’ She was like, ‘I need you to be dressed up and tomorrow you need to be at this press conference. We’re converting to the SEC.’

“I was like, ‘What? Do you realize we’re going from a good, solid conference to the elite overnight?’”

Arkansas coach Lance Harter, center, holds the trophy as his team celebrates after winning the women's title at the NCAA indo... + Enlarge

In the late 1980s LSU had emerged as a power on the women’s side comparable to McDonnell’s men at Arkansas. Florida, Alabama and Tennessee were players on the women’s national stage, and Kentucky was two years removed from a national championship in cross country.

“I had no question he’d be able to meet that challenge,” Lewis said.

In Harter’s specialty, distance running, Arkansas adapted quickly to the new league, winning five consecutive SEC cross country titles from 1991-95. It took a while longer to find the right balance to win on the track, but after hiring what would become long-time assistants Lonnie Greene and Bryan Compton, the the Razorbacks were beginning to win titles in all three seasons by 2000.

They haven't slowed down since.

In 30 years at Arkansas, Harter has won five NCAA championships — the only team titles for women’s sports at Arkansas — and 38 SEC championships, and has coached numerous All-Americans and Olympians.

In 2019 the Razorbacks became the third program to ever win the NCAA indoor, outdoor and cross country titles in succession, and Arkansas' 2020 SEC indoor championship was its 18th in the last 20 conference meets.

"It turned out OK," Harter said.