No denying Fassi her NCAA dream 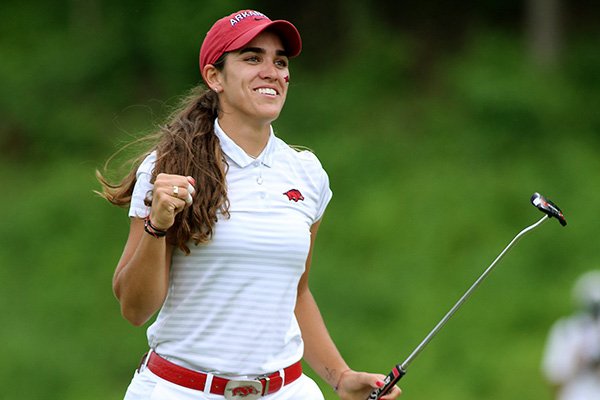 FAYETTEVILLE -- A couple of days after the NCAA announced in April 2017 that the University of Arkansas had the winning bid to host the 2019 NCAA Golf Championships at Blessings Golf Club, then-sophomore Maria Fassi strolled into Coach Shauna Taylor's office with a prediction.

Fassi said she planned to walk up the 18th fairway at Blessings with Taylor en route to celebrating the NCAA individual title.

One year ago today, Fassi made that happen, winning medalist honors by four strokes over Florida's Sierra Brooks on a windy day in Northwest Arkansas.

"I think the best way to describe it is a dream come true," Taylor said this week in anticipation of the anniversary of Fassi's championship. "Being able to walk by her side and watch her do that in front of all the Razorback Nation, it's something that will be etched into my memory forever."

With Fassi safely on the No. 18 green and holding the relatively big lead, the senior from Pachuca Hidalgo, Mexico, felt comfortable enough to call the Hogs with her teammates and a big pack of Arkansas fans in an arc around the green.

"I mean, the people that were out here today with us and the team ... were amazing to me, and it felt surreal. It was just way better than what I had dreamed."

Fassi joined an exclusive trio in Arkansas golf history. Men's champion R.H. Sikes in 1963, women's champion Stacy Lewis in 2007 and Fassi are the Razorbacks only NCAA medalists in school history.

Fassi, who deferred her membership on the LPGA Tour last summer to have a shot at the NCAA team and individual championships, had to fight a strong field and the weather to earn her title.

Thunderstorms caused delays during the tournament, which shortened the women's individual championship to three rounds. Fassi shot 1-under 72 in the first round and trailed Arizona's Bianca Pagdanganan by three strokes. She fired a 2 under in the second round and was behind Brooks by one shot entering the final round.

With her extraordinary power off the tees and superior knowledge of the Blessings' 6,397-yard layout, nobody was going to go lower than Fassi on the final day, despite the rough conditions.

"There was no way anyone was going to beat her today," Lewis told Golfweek after watching much of the championships.

"I was feeling very comfortable with the way I was playing the previous two rounds and I knew I had to shoot a round in the 60s if I wanted to have a chance at the title, and like I said, I was feeling really good with my game," Fassi said that day. "I've been feeling that way for two months or so. It was just like any other final round because I tried to go out there and stay aggressive and I started off strong."

Fassi birdied the par-5 second hole, then birdied the par-4 sixth and the par-3 eighth to open up a two-shot lead over Brooks, who fired an even-par 73 earlier in the day. When a weather delay suspended play after Fassi's birdie on the par-4 12th hole, she adjusted her mindset when play resumed with a three-stroke lead.

"When we came in for the rain delay, I was able to see where I was standing, and after that I honestly just was playing smarter golf," Fassi said. "I was looking for the easiest shot since I knew I had kind of like a cushion."

She managed another birdie on the 16th hole to finish off her bogey-free round of 68, the best round by a woman at the championships.

"It was super windy," Taylor recalled. "That final round she played was maybe one of the best rounds of golf I've ever seen played. For her to do that at home in front of our crowd under those conditions, under that pressure, I think just shows a lot about who she is and the competitor she is."

Fassi, now based in Orlando, Fla., got her LPGA career off to a great start with a tie for 12th place in the U.S. Women's Open for a payday of $103,000 just 13 days after winning the NCAAs. The rest of the 2019 season did not go as well, with no other top 30 finishes and a series of missed cuts in June, July and August.

However, in her final tournament prior to the coronavirus pandemic, Fassi tied for 13th in the Australian Open on Feb. 16th at 6-under par.

At this point, the LPGA Tour is on hiatus until at least the third week of July.

"I know she's hungry and ready to compete," Taylor said. "She played a week ago in a mini-tour event with guys down in Florida. She's just trying to do anything she can to give her practice purpose.