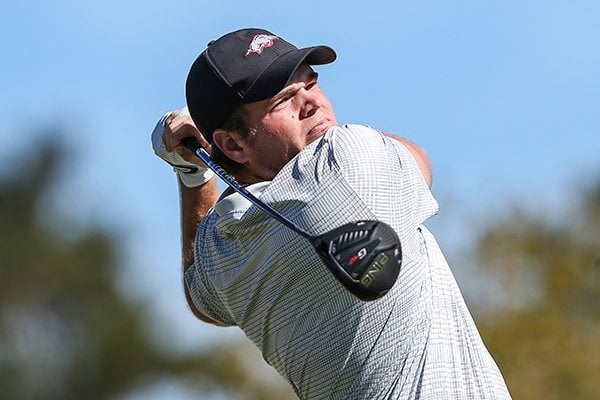 Arkansas golfer Mason Overstreet tees off on the first hole during the first round of an NCAA golf tournament on Monday, Feb. 3, 2020 in Ponte Vedra, Fla. (AP Photo/Gary McCullough)

FAYETTEVILLE — Arkansas senior Mason Overstreet was named the SEC men’s golf scholar-athlete of the year on Wednesday for the second consecutive season.

The Kingfisher, Okla., native has already graduated with a degree in business finance with a 3.88 grade point average. Overstreet is also a nominee for the SEC’s H. Boyd McWhorter Scholar-Athlete Post-Graduate Scholarship.

Overstreet has been on the SEC academic honor roll four times in his career and has posted a 4.0 GPA five times to earn Chancellor’s List recognition. With only four career “B”s on his transcript, he has also made the Dean’s List three other times.

The NCAA runner-up as a true freshman in 2017, Overstreet boasts a career scoring average of 72.04, which ranks second on Arkansas’ all-time list behind only the 71.8 average of Sebastian Cappelen (2010-14).

Overstreet and PGA pro Austin Cook of Jonesboro are the Razorbacks’ only two-time SEC Scholar-Athlete of the year recipients in men’s golf. Overstreet is the fifth SEC golfer to earn the honor in consecutive years.