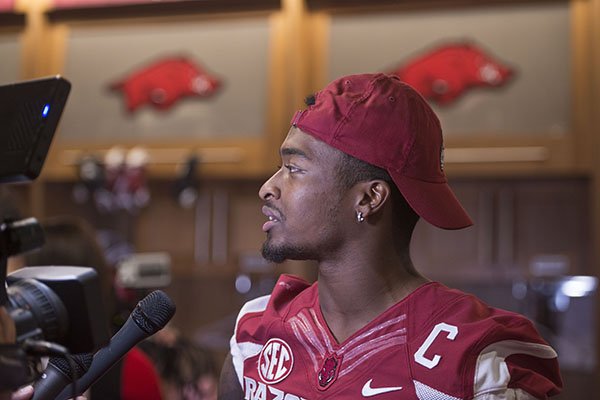 Richardson, who played in 47 games over six years with the Razorbacks, will coach nickel backs for the RiverHawks, according to a post on his Twitter account on Wednesday.

Excited to announce that I’ll be joining the staff at @NSU_Football as the Nickelbacks Coach! #TeamNSU pic.twitter.com/Wue1D2RZcX

Northeastern State competes at the NCAA Division II level and is a member of the Mid-America Intercollegiate Athletics Association.

At Arkansas, Richardson recorded 125 tackles in his career and, in 2017, tied for the team lead with three interceptions. He returned a fumble 22 yards for a touchdown at Ole Miss in the Razorbacks’ most recent SEC win in October 2017.

A Jacksonville native who came to Arkansas as a walk-on, Richardson redshirted his first season in 2013 and suffered a season-ending injury in the first game of 2016 when he tore his pectoral muscle and required surgery.

In May 2018 he became the second Arkansas player to ever receive a sixth year of eligibility from the NCAA.

Roughly one year later, Richardson signed with the Hamilton Tiger-Cats of the Canadian Football League. He was most recently an assistant football coach at MidAmerica Nazarene University in Olathe, Kansas.