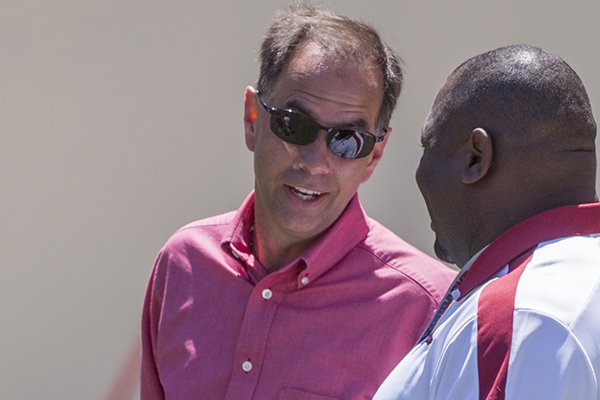 FAYETTEVILLE — The University of Arkansas football program, which finished last in the SEC standings in 2018 and 2019 with a 4-20 overall record, also struggled statistically from an academic progress standpoint.

Arkansas ranked last among SEC football teams in Academic Progress Rate (APR) for the 2018-19 school year with a score of 895, according to data released by the NCAA on Tuesday.

That score is for Chad Morris’ first full school year as the Razorbacks’ coach.

The good news for Arkansas is the football team’s multiyear APR score — a combination of scores for the four previous school years — is 962. That’s well above the NCAA bench mark of 930 required to avoid possible penalties that could include a loss of scholarships and practice time, or in particularly dire situations a postseason ban.

Under the APR scoring formula used by the NCAA since the 2004-05 school year, each person receiving athletic-related financial aid earns one point for staying in school and one point for being academically eligible during the fall and spring semesters for a maximum of four points per school year.

The Arkansas football team’s APR score for the 2018-19 school year is reflective of a mass exodus of players under Morris, who was hired in 2018 and fired with two games left last season after a 45-19 loss to Western Kentucky.

A total of 24 scholarship players left the UA program under Morris, dealing the team’s APR a blow.

Players’ academic records are protected by privacy laws, but for a sport to be awarded an APR retention point for a transfer, he has to not only be academically eligible but carry at least a 2.6 grade-point average in his final semester.

The APR math makes it clear many of the transfers under Morris did not meet that standard.

In the previous three years under Bret Bielema, who was fired after the 2017 season, the single-year APR scores for the football team were 985, 988 and 981.

“Certainly we pay attention to single-year rates,” said Jon Fagg, Arkansas’ deputy athletic director. “[The football score] raises more red flags for us, but that’s why APR is based on a four-year rolling average. So it allows for an outlying year.

“We continue to work with coaches, student-athletes and our staff to ensure that we don’t have repetition of those kinds of numbers.”

Fagg said he’s confident Pittman will oversee improvement in the Razorbacks’ academic performance as well as on the field.

“I’m incredibly confident in Sam and his staff,” Fagg said. “They’re extremely dedicated to academics. They’re dedicated to the overall person — the athlete and the student. I think that usually is reflected in APR scores.

“I think Sam and his staff are going to do great. They really care about their kids. That’s very, very evident.”

The Arkansas men’s basketball team had a 920 APR score for the 2018-19 school year — Mike Anderson’s last as the Razorbacks’ coach — but the program’s multiyear average is 958.

Daniel Gafford, now a rookie with the Chicago Bulls, left the team before the NIT to focus on preparing for the NBA Draft.

Anderson did a good job overall with the basketball program’s APR, which had a four-year score of 968 last year.

During the 2011-12 season — Anderson’s first as the Razorbacks’ coach — the team suffered the loss of a scholarship as a penalty imposed by the NCAA for having an 892 score for the previous four years.

“In basketball, you have a couple of guys transfer and that number can drop pretty quickly.”

Fagg said he expects Arkansas to have strong APR scores under Coach Eric Musselman, who was hired as Anderson’s replacement and led the Razorbacks to a 20-12 record last season.

“Eric and his staff do a great job,” Fagg said. “They’re so dialed into every aspect of the program that I doubt very seriously academics will be an issue.”

Nevada, where Musselman coached the previous four years, had a 950 combined APR score during his tenure.

While Nevada’s score for the 2018-19 year was 922 for Musselman’s final year, Fagg said he’s confident that won’t be the case at Arkansas.

“Eric is focused on academic success as well as athletic success,” Fagg said. “When we’ve had discussions about potential players coming into the program, academic profile is always a part of that conversation.”

All 17 of Arkansas’ men’s and women’s sports had multiyear scores at least 28 points above the NCAA benchmark, including seven sports with perfect scores of 1,000 in women’s cross country, golf, gymnastics, softball, swimming and diving, tennis and volleyball.

“We really have come a long way from 10 years or so ago of having basketball in incredibly bad shape, and some other sports closer to the [NCAA benchmark] border compared to what we’re doing now,” Fagg said. “Obviously, we’re incredibly proud of our student-athletes and the dedication they show to academics, and then the dedication our coaches and counselors put in together to insure that we’re successful academically.”

Matt Jones of WholeHogSports.com contributed to this report