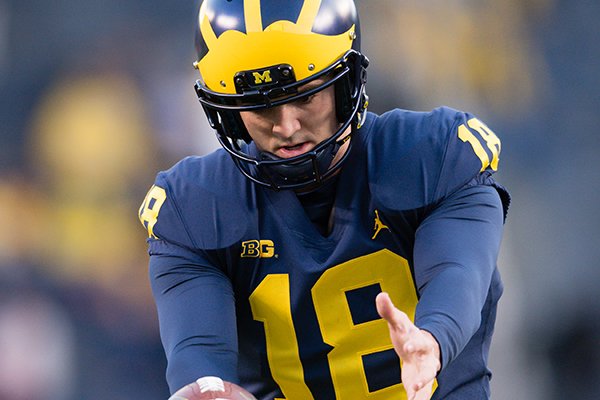 Michigan punter George Caratan warms up prior to a game against Wisconsin on Saturday, Oct. 13, 2018, in Ann Arbor, Mich.

After two years of watching Big Ten football, former Michigan punter George Caratan is excited to see what life is like in the SEC.

Caratan announced Monday that he was transferring to Arkansas as a walk-on with three years of eligibility left. He will be eligible immediately. He chose Arkansas over Missouri and San Diego State in large part because of Razorbacks Coach Sam Pittman and special-teams coordinator Scott Fountain.

"I really liked Coach Fountain and Coach Pittman," Caratan said Wednesday. "I wanted to be a part of a rebuilding program that might need some help in flipping the field [although] hopefully we don't. I really think coach Fountain is the best special-teams coach in the nation, and I wanted to be able to learn under him. Coach Fountain recruited me for a long time and when he finally offered me it meant a lot because he took his time and really evaluated me."

Caratan, who averaged 46 yards per punt as a senior at St. Thomas (Conn.) More, did not get chance to kick in his two years at Michigan. He will battle returnees Sam Loy and Reid Bauer, and newcomers Rhett Thurman and Vito Calvaruso at Arkansas. Loy averaged 39.5 yards on 56 punts last year, with five of those going over 50 yards or more. He placed 19 punts inside the 20-yard line.

"I knew I was ready to start, and I'll be immediately eligible at Arkansas," Caratan said. "The job is open, but I am still going to have to go in there and compete."

Cartan also converted 4 of 5 field goals, including a 46-yarder, and 35 of his 41 kickoffs were touchbacks.

Thurman was 6 of 8 on field goals as a senior with a long of 38 yards, 21 of 25 on extra points, and also averaged 36 yards on 24 punts, with a long of 59 yards while downing seven punts inside the 20-yard line. Calvaruso is viewed as one of the nation's top kickoff specialists after having an 80% touchback rate in high school, something needed for a program that had just 28 touchbacks on 54 kickoffs last season.

Calvaruso converted 11 of 15 field goals as a senior with a long of 50 yards, and connected on 42 of 43 PATs. He had a 42-yard punting average with a long of 67, and also threw a 20-yard touchdown pass on a fake field goal. He also kicked a 55-yard field goal at Kohl's Kicking Camp in July, and he is ranked as the 20th-best kicker in the country in Kohl's rankings.

Arkansas also added Duke graduate transfer AJ Reed, a 2019 Lou Groza semifinalist as one of college football's top kickers. Reed led the Blue Devils in scoring with 79 points last season while connecting on 15 of 18 field goals (three of over 49 yards) and 34 of 34 PATs.

He is the odds-on favorite to replace Connor Limpert, also a Lou Groza semifinalist last season.