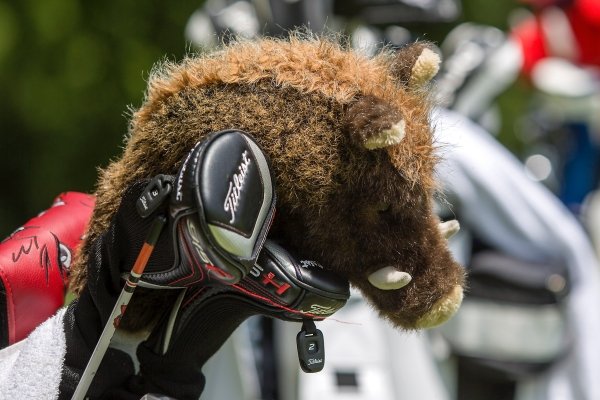 A Razorback head cover sits in a golf bag at Pinnacle Country Club in Rogers during practice rounds for the Walmart NWA Arkansas Championship.

Arkansas freshman Ela Anacona was named second-team All-SEC in voting by the league’s 14 head coaches released by the conference office on Thursday.

Anacona, of Buenos Aires, Argentina, was also named to the 10-player All-Freshman team.

“Ela was a big piece in our team’s success this season,” Arkansas Coach Shauna Taylor said in a UA release. “She has come in as a freshman and made an immediate impact. She is a tireless worker, prepares very well for each event, and is a fierce competitor. You combine those three items and you have a recipe for success.

“She is just getting started and I’m thrilled to see her get honored for her great golf.”

LSU’s Ingrid Lindblad was selected as both SEC player of the year and freshman of the year, while Ole Miss’ Kory Henkes was voted as coach of the year.

Anacona played in five of the Razorbacks’ six events during the 2019-20 season and finished in the top 2 of four of them. Her first top-20 finish came in the ANNIKA Intercollegiate when she tied for 19th place.

Anacona peaked at the White Sands Invitational at Paradise Island, Bahamas, when she fired two rounds of 69 and placed sixth with a career-best 211 in the three-round tournament.

In the Razorbacks’ final competition of the spring prior to the coronavirus shutdown, Anacona placed 23rd in the Darius Rucker Invitational at Long Cove Club on Hilton Head Island, S.C.