LeBlanc an extension to Broyles tree 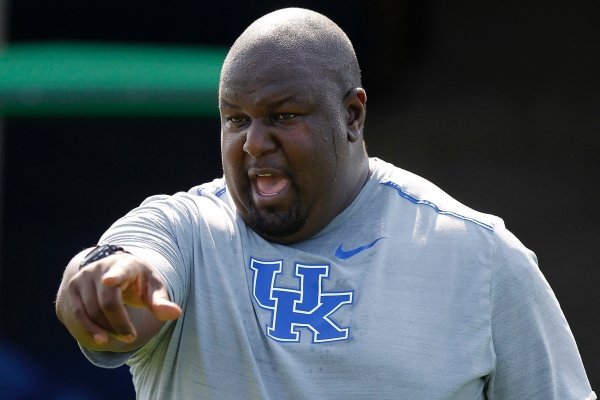 Derrick LeBlanc, who was hired to Sam Pittman's first staff at Arkansas, spent the last three seasons at Kentucky under Mark Stoops. He will coach the Razorbacks' defensive line.

FAYETTEVILLE — New Arkansas football Coach Sam Pittman doesn’t have a native Arkansan on his 10-man Razorbacks staff, but he’s got one assistant rooted to a Branch on Arkansas’ football family tree.

At Northwestern State LeBlanc had played for Sam Goodwin, the Henderson State athletic director who had been a fellow assistant with Branch for two years under Holtz and brought Jesse out of retirement to coach the Reddies.

“I just wanted to coach again but I didn’t have any idea who I was going to get to come to Henderson to coach with me,” Branch said. “It just so happened Sam had this guy who played for him at Northwestern State. He was going to be the weight coach and coach the defensive line. He would do anything.”

Turned out that guy, Derrick LeBlanc, would do very well, Branch said.

“He was an excellent, excellent coach and handled the strength program and do a little bit of everything,” Branch said. “No.1 he was just a good guy. The players all loved him. They thought he was fantastic. I have not gotten to see Sam Pittman (Arkansas’ offensive line coach from 2013-2015 returned in December as head coach) since he came back here. So I didn’t have anything to do with it. But I tell you somebody told him something about Derrick and I think he got a great coach. I think Sam really knows what he’s doing.”

The first he coached under in Arkansas sure knew what he was doing, LeBlanc said.

“As a young coach I learned a lot from Coach Branch,” LeBlanc said. “He’s an awesome guy.”

Why did LeBlanc come? It branches back to those 2001-2004 years under Branch and 2005 under Steve Mullins at Arkansas Tech.

“I got my start in this state,” LeBlanc said. “We have a lot of people that we love and a lot of players that I coached before that are now coaching high school and college in the state. So it was a no-brainer for us.”