When I was hired: Dave Van Horn left a good job to come home 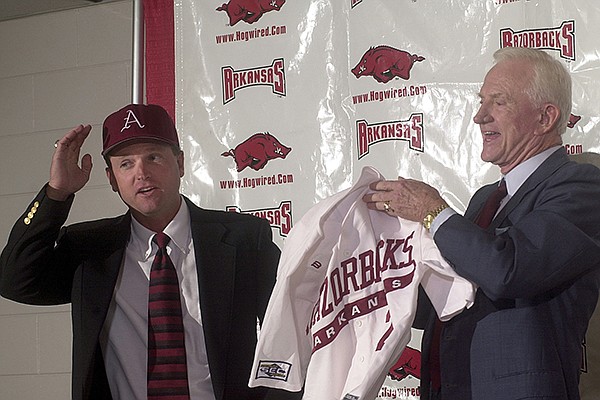 FAYETTEVILLE — The week before Dave Van Horn took over for Norm DeBriyn as Arkansas’ baseball coach, the men nearly were in opposing dugouts at the College World Series.

It came down to June 9, 2002, when DeBriyn’s Razorbacks faced Clemson, and Van Horn’s Nebraska Cornhuskers played Richmond in Game 3 of their respective super regionals. If Arkansas and Nebraska both won that day, they would have played each other at Rosenblatt Stadium in Omaha, Neb., the following weekend.

The dream matchup wasn’t meant to be, though. The Cornhuskers won 11-6 on their home field, while the Razorbacks lost 7-4 at Clemson.

“That would have been unreal,” DeBriyn said of facing his protege in Omaha.

Two days after the super regional loss to Clemson, DeBriyn retired after 33 years as the Razorbacks’ head coach. He had made the decision a week earlier after Arkansas — likely the last at-large team to make the NCAA field that year — won its regional at Wichita State.

On the drive home from Kansas, DeBriyn told his wife. The only other person he told at the time was Van Horn.

DeBriyn knew Van Horn would be the front runner for the Arkansas job. In 2001, Van Horn led Nebraska from a baseball afterthought to the College World Series for the first time.

Nineteen years earlier, Van Horn played for DeBriyn at Arkansas. A junior college transfer, Van Horn was the 1982 Southwest Conference newcomer of the year when he led the team with a .367 batting average and committed only three errors after moving from third to second base.

“He was like a coach on the field,” DeBriyn said. “I remember during one of our stretches he jumped on a freshman because the guy was late. I was kind of embarrassed because I was like, ‘Here’s one of our players jumping on him when I should have been doing that.’ That made an impression on me.”

This is the sixth in a multi-part series detailing the backstory to head coaches being hired at Arkansas.

Van Horn returned to Arkansas in 1985 and coached on DeBriyn’s staff as a graduate assistant for four seasons. The Razorbacks played in two College World Series during that time, and again the year after he left.

In those days graduate assistants could recruit. DeBriyn took Van Horn on the road with him and would often listen as Van Horn pointed out the best prospects on the field.

Likewise, Van Horn listened to what it took to lead a program. In 1987 he accompanied DeBriyn to a coach’s news conference prior to an NCAA regional and observed how to conduct himself with media.

“He was just so intuitive and so good in his evaluation,” DeBriyn said. “Coaching on the field, we got better in the mid-‘80s because of him working with our infielders.”

Despite enjoying success as a JUCO head coach in Texarkana, winning a national championship in his only year at Division II Central Missouri, and coaching three years at Northwestern State in Division I, Van Horn flew under the radar of Arkansas athletics director Frank Broyles until 1997 when he asked DeBriyn if Broyles would recommend him for the Nebraska job.

Two days after DeBriyn made the initial request, Broyles had not followed through. DeBriyn urged Broyles to look over Van Horn’s resume.

The next day DeBriyn went back to Broyles' office, where an excited Broyles exclaimed, "He has won wherever he's gone!"

Broyles and Terry Don Phillips, his assistant athletics director at the time, recommended Van Horn for the Nebraska job, DeBriyn said. He got the job after wowing Cornhuskers athletics director Bill Byrne during an interview in Natchitoches, La.

“I haven’t been that sold on a coach that quickly I think ever in my career," Byrne told WholeHogSports in 2018.

Once he had taken the Nebraska job, Van Horn came to Fayetteville to scout a summer league game at Baum (now Baum-Walker) Stadium. Knowing he was nearing the end of his coaching career, DeBriyn saw an opportunity to connect his boss with his pupil.

“I knew he would be a perfect replacement,” DeBriyn said of Van Horn. “That was my motive of him talking to Frank that morning, and I think they had a great visit. It went on for a long time.

“So then Coach Broyles followed his career and knew what he was doing at Nebraska, being a Razorback and so forth.”

In 2000, Broyles and DeBriyn got an up-close view of Van Horn’s team. The Razorbacks and Cornhuskers played three times that year, with Nebraska winning by scores of 13-2 in Arlington, Texas, and 10-4 and 10-3 in Fayetteville.

“It was just an eye opener," DeBriyn said. "It was a great exhibition on Nebraska’s part, headed by Dave.”

There was little doubt Broyles would target Van Horn when the job opened. It seemed to be all anyone in Arkansas or Nebraska wanted to talk about, even as Van Horn’s team prepared to play Clemson in the College World Series.

The Cornhuskers lost both games in Omaha that year and Van Horn went home to Lincoln. A local radio station left more than 300 letters from fans on his front porch that urged him to stay, and media were staked outside his house.

“I can honestly say we were trying to hide from them,” Van Horn said. “In a couple of cases people were trying to look through the windows. (Wife) Karen wouldn’t come out of one of the bedrooms, and if I needed to go somewhere I basically crawled around on my hands and knees so they couldn’t see me in the windows.”

Van Horn met with Broyles in Fayetteville on a Tuesday, two days after the Cornhuskers were eliminated. He told Broyles he wanted three things in order to take the job.

First, he wanted the batting and pitching cages — which at that time were outdoors — to be enclosed so players weren’t battling the elements while they practiced. He also wanted the coaches’ offices moved to the baseball stadium from the Broyles Center about 1.5 miles away.

Finally, he told Broyles he wanted to add seats to the stadium that was built six years earlier.

Van Horn knew Northwest Arkansas was growing quickly and the Razorbacks might begin to attract larger crowds. More than that, he thought the grass berms down the outfield lines looked bad and wanted to modernize the stadium to appeal to recruits.

DeBriyn was relieved when Van Horn called again with another message.

Back in Nebraska, Van Horn met with Byrne, who brought to Van Horn’s office an offer he hoped would entice him to stay.

“He slid a big manila envelope in front of me and said, ‘Hey, I want you to see this contract and what we’re going to do for you before you tell me anything,’” Van Horn said.

“I just kind of sat there for a second and I slid it back to him. I said, ‘I’m not going to open it. I’m going to go to Arkansas.’”

Of that time, Byrne said, “That was really hard. We offered more money to keep him, but it was just Mama calling him home. Frank did a nice job of getting him back to Fayetteville.”

Van Horn said he felt bad leaving Nebraska, but he always wanted to be at Arkansas. It was where he and his wife met, where he felt comfortable. He even liked the weather.

And it provided him a chance to move his wife closer to her hometown of Little Rock after living in four other states in nine years. When he was introduced as the Razorbacks' head coach on June 21, 2002, he told reporters he didn't plan to move again.

“Norm wanted me, I felt like, to take over the job that he had been at for 33 years and I felt a lot of loyalty to him and the university," Van Horn said. "It was difficult, but obviously it felt like it was a great move.”

A year before he was hired at Arkansas, a member of Georgia’s search committee spoke to Van Horn about its coaching vacancy. The interest felt serious until the committee member asked the question: If you came here and Norm DeBriyn retired in a year or two, what would keep you from going there?

In 2004, Van Horn coached Arkansas to a regular-season SEC championship — split with Georgia — after the Razorbacks were predicted to finish 11th in the league in the preseason. Arkansas was a national seed for the first time, won a home regional for the first time and swept Florida State in its first home super regional.

An announced crowd of 10,027 — an NCAA record for a super regional game at that time — packed Baum Stadium for Game 2 when Arkansas clinched its trip to Omaha.

Fans have poured through the gates by the hundreds of thousands each season since 2005, with Arkansas finishing in the top five nationally in attendance each year. The Razorbacks have clinched three more trips to the College World Series on their home field and have gone to Omaha six times total under Van Horn, who has the most CWS appearances among active coaches.

In March, Van Horn won his 700th game at Arkansas.

Next year the baseball program will open a $27 million operations center. Next door is a state-of-the-art indoor practice area.

"It's really rewarding, to be honest with you, to see all that has gone on over the years," Van Horn said. "It's like anything else you do in life, you want to see things get better and accomplish things, and be part of it."

Broyles, who retired in 2007 and died in 2017, had a running joke as Van Horn built the Razorbacks into one of the nation’s premier teams.

Broyles would say the addition of 2,600 chair-back seats prior to Van Horn's first season in 2003 was one of the dumbest things he ever agreed to, but wound up being one of the smartest decisions he ever made.