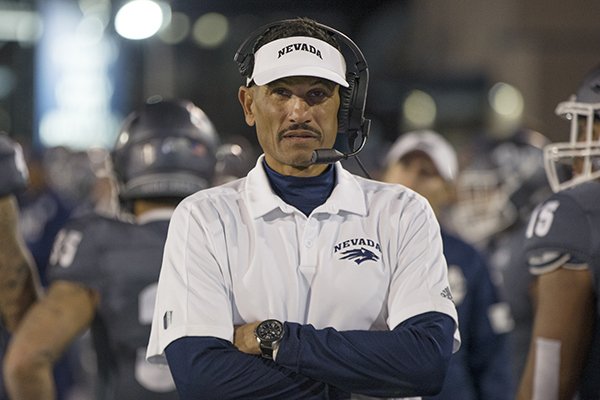 Like Pittman, Norvell spent 25-plus years as an assistant coach -- many of them in Pittman's home state of Oklahoma -- before getting his first shot as a major college head coach well into his 50s.

Musselman's four-year tenure as men's basketball coach at Nevada overlapped two years with Norvell, who moved to Reno, Nev., for the 2017 season after one year at Arizona State as passing game coordinator and wide receivers coach.

Norvell, also like Pittman, has a reputation as a players coach and one of the game's "good guys," which he exhibited in an interview with the Arkansas Democrat-Gazette on Friday.

"I'm really happy for Sam that he's gotten this opportunity. He's a tremendous coach and a good man. So I'm real happy for Sam."

If college football stays on schedule, Norvell's Wolf Pack and Pittman's Razorbacks will meet on Sept. 5 at Reynolds Razorback Stadium in Arkansas' season opener. Nevada has its season opener scheduled at home against UC-Davis on Aug. 29, but that game is still iffy.

Asked about his relationship with Musselman, Norvell perked up again.

"Muss? Tell Muss I said hello," Norvell said. "We were here two years together. Muss is a high-energy guy. He had a lot of success here and did a great job here at Nevada."

Norvell's Wolf Pack did not get to start spring drills, just like Arkansas, before the coronavirus pandemic struck. He said he's eager to have his roster back on campus because his fourth season is shaping up to be a strong one with 10 returning offensive starters and depth on both sides of the ball.

While the SEC has a defined date of June 8 to allow football players back in campus training facilities, Nevada and the Mountain West Conference have not made a definitive call.

"We have not made a conference announcement," he said. "But we're in line with the NCAA ruling [last] week. Our plan is to bring our players back in June, and we still have a couple of things [to wait on] because our state hasn't moved to Phase 2 yet.

"So we're still waiting to hear from the governor of Nevada to move to Phase 2. That would put our employees back on campus. When that happens, we'll be able to start bringing our players back. We still have a couple of steps before we get there, but that's the plan right now."

When the Wolf Pack do get back to business, they'll likely be regarded as a contender in the West Division of the Mountain West after finishing 7-6 a year ago and 4-4 in the conference, one game behind division co-champions Hawaii and San Diego State.

Quarterback Carson Strong returns as a sophomore after the 6-5, 220-pounder passed for 2,335 yards, 11 touchdowns and 7 interceptions and completed 64% of his passes in 10 games. Top tailbacks Toa Taua and Devonte Lee are both back, as are 6-4 wideout Elijah Cooks, 6-2 wideout Romeo Doubs and all five members of the offensive line.

"All the way around, the team is more veteran," Norvell said. "We've got more guys who have played meaningful snaps. We've got more experience coming back, especially offensively.

"When we got here three years ago, I'd like to say we were small and slow. It was a bad combination. We worked really hard to improve our athletic ability and also to improve our size.

"And that's probably no more evident than on defense. We've got a real veteran defensive line that's played quite a bit."

The Wolf Pack ran a 3-3-5 stack defense the past couple of seasons, but they're moving to a four-man front under new coordinator Brian Ward, who was hired Jan. 29.

"We've got good-sized defensive ends, 270-275 pounds," Norvell said. "We've got 300-plus pound defensive tackles. That's very different than when we first got here three years ago. So we've got a lot of good athletes on defense returning. We're more athletic at linebacker.

"So we're excited to get this season played, because we feel like this will be the best team that we've had since we've been here."

Norvell calls himself a "big structure and routine" guy, so he and his staff quickly set up a game plan for meeting, coaching and recruiting after the coronavirus suspension hit.

The Wolf Pack, like the Razorbacks, have gone heavy on learning schemes during their video conferencing.

"We're probably going to have to do more of that in June because we're probably not going to get the same interaction we normally would get, even though we're starting to transition back. So I do think there's been some good things about this. We've learned how to use this technology, and I do think a lot of this technology is going to continue to be used as we move forward."