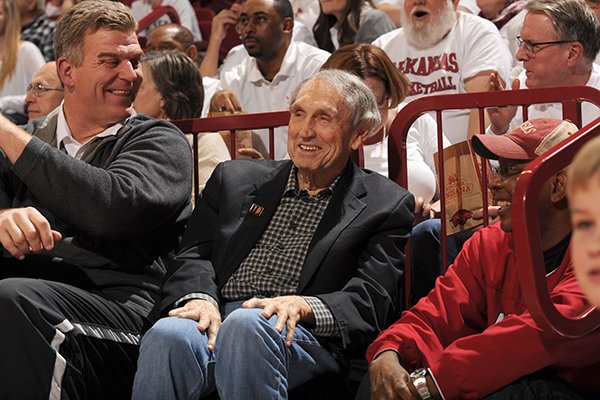 FAYETTEVILLE -- Joe Kleine was going into his redshirt sophomore season as a University of Arkansas basketball player in 1982 after transferring from Notre Dame when he learned his father, Robert, had been diagnosed with leukemia.

"It was tough being young and having to experience that for the first time, the possible death of a family member," Kleine recalled on Sunday. "I had some pretty dark days."

Kleine said Eddie Sutton, his coach at Arkansas, helped him deal with his father's illness.

"Coach Sutton and I had some really good talks, and that meant everything to me," Kleine said. "They were father-son type of talks.

"I'm very grateful he was there for me, because he was like talking to my dad. I definitely have leaned on Coach Sutton a lot through the years."

Robert Kleine died in 1986 after his son's NBA rookie season with the Sacramento Kings following his Arkansas career that included being a two-time All-Southwest Conference center.

On Saturday night, Kleine experienced similar feelings of grief when Sutton died at his home in Tulsa at age 84.

"Coach Sutton was like a family member to me," Kleine said. "There's no doubt."

Kleine, the co-owner of Corky's Ribs and BBQ in Little Rock and North Little Rock, drove to Tulsa on Saturday to see his old coach one last time.

Sutton, who was in hospice care, had lost most of his ability to speak when he suffered a stroke three years ago.

"I knew when I was going over there I wouldn't be able to talk to him, but I also wanted to show my respects to the family," Kleine said. "I wanted to say goodbye to Coach."

Darrell Walker, an All-America guard for Sutton at Arkansas as a senior in 1983 who then was an NBA player and coach, visited Sutton 's home April 3 when he was elected to the Naismith Memorial Basketball Hall of Fame.

"Coach Sutton and I bumped heads because I was hard-headed and strong-willed and he was, too," said Walker, the coach at the University of Arkansas at Little Rock. "But at the end of the day, every time I walked out of that gymnasium, I always felt that he cared about me."

Walker was from Chicago.

"I grew up in the projects on the south side of Chicago," Walker said. "It wasn't the safest place. You had to fight to survive every day. You'd see people get shot, people with needles in their arms."

"We all have to grow up some time, and there are times when you need to accept tough love," Walker said. "Coach Sutton dished it out to me, and I learned to take it, and I grew from that.

"Coach and I developed an unbelievable relationship. We had a really good bond. A lot of times I'd be in Coach's office talking about everything. Just about life."

Walker was an assistant coach with the New York Knicks when he graduated from Arkansas in December of 2012 -- 30 years after he was a star player for the Razorbacks.

Fittingly, Walker went through his graduation ceremony in Barnhill Arena, where he played. At Walker's request, Sutton presented him with his bachelor's of education in human resource management diploma.

"He walked me across the stage when I got my degree," Walker said. "He saw me come full circle."

"Coach Sutton easily could have run me off, and I'm sure he there were a few times he wanted to run me off," Walker said. "I know that Patsy stopped him.

"Patsy told Coach Sutton I wasn't going anywhere. She thought I had some good qualities and she also knew some things that I had to overcome. But she told Coach, 'I see something in Darrell that maybe you don't see.' "

Walker said he often went to the Sutton home in Fayetteville to visit Eddie and Patsy and their sons Stephen, Scott and Sean.

"You'd be shocked how many times I showed up at their house going, 'Your adopted son is here,' " Walker said with a laugh. "I spent a lot of time with Coach Sutton and Patsy.

"I talked to Coach all the time when I played in the NBA, when I was an NBA coach. We were always in contact."

Jim Counce, a heart surgeon who lives in Springdale and was Sutton's first signee with the Razorbacks in the spring of 1974, said Sutton enjoyed a close relationship with many of his former Arkansas players and promoted a family atmosphere within the program he led for 11 seasons from 1974-75 through 1984-85.

"Coach Sutton was a great example for us as a father and husband," said Counce, a senior forward on Arkansas' 1978 Final Four team. "The relationship he had with Patsy was special. His sons were always around, and Coach was always doting on them."

"Dad and Mom treated their players like family and always shared the belief that his teachings went beyond the basketball court," the family statement read.

Counce said Sutton "just had a way of maintaining that connection with us regarding our lives beyond basketball" when it came to his former players.

"The last thing you want when you leave a program is to feel like any connection that you had is gone, and he just didn't allow that to happen," Counce said. "I can't tell you the number of times he called out of the blue when I was in medical school just to see how things were going.

Walker said it was tough learning of Sutton's death.

"But I'm at peace," Walker said. "He's in a better place now with Patsy and he's not suffering any longer."

Sutton, who had an 806-326 record in 37 seasons as a college head coach with 25 NCAA Tournament appearances, left Arkansas for Kentucky and had his longest stint at one school with 16 seasons at Oklahoma State. He began his college career at Creighton and finished it as the interim coach at the University of San Francisco during the 2007-08 season.

"To me the most remarkable thing about Coach Sutton is he's 35 years gone from the University of Arkansas right now, and yet his presence and influence makes it seem like he just left yesterday," Counce said. "Because of the way it's persisted in the state of Arkansas. The fondness the people of Arkansas have for him."

Kleine said he maintained a close relationship with Sutton when he went to the NBA.

"Usually the last thing we talked about was basketball," Kleine said. "Whenever we'd see each other in the summer or talk on the phone during the season, the last thing that would come up was, 'How is your team and how are you playing?' That part of the conversation would be very short.

"Coach would start by asking about my wife and kids, and we'd talk about what I wanted to do with my future. He'd always say, 'Save your money.'

"All the things a dad would say to you."