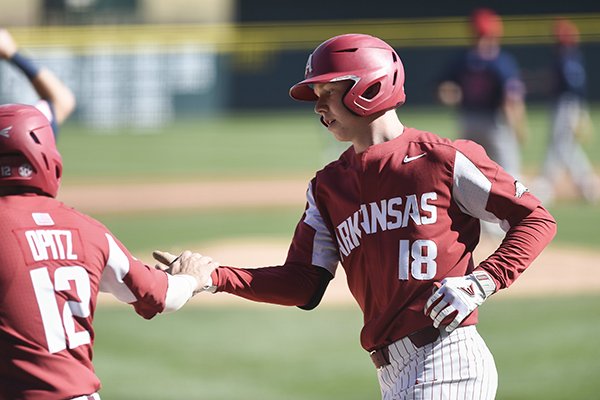 Arkansas outfielder Heston Kjerstad (18) is greeted at home plate by catcher Casey Opitz (12) during a game against South Alabama on Saturday, March 7, 2020, in Fayetteville.

FAYETTEVILLE — A shortened 2020 season did not keep Arkansas outfielder Heston Kjerstad from landing on an All-America list.

Kjerstad was named a first-team All-American by Collegiate Baseball Newspaper on Tuesday. He was one of seven SEC players on the 17-player first team.

Over 16 games played this season, Kjerstad led the Razorbacks with a .448 batting average, six home runs and 20 RBI. He opened the season with a 7-for-12 series against Eastern Illinois in which he hit four home runs - two in the opener, two in the finale - and drove in 10 runs.

Kjerstad recorded at least one hit in all 16 of Arkansas’ games as a junior and finished with multiple hits 10 times. He hit a game-winning home run in the bottom of the ninth inning to give the Razorbacks a 5-3 victory over South Alabama on March 8.

A.J. Lewis, a graduate-transfer catcher from Eastern Kentucky who signed to play for the Razorbacks earlier this month, was also named a first-team All-American by Collegiate Baseball.