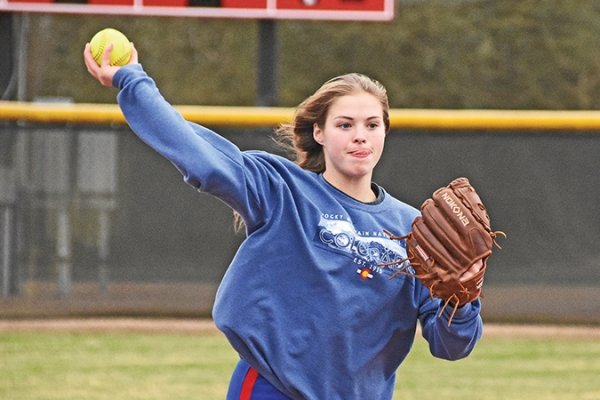 Beebe senior Hannah Gammill prepares to throw a ball toward first base. Gammill signed with the University of Arkansas in November.

Time, on the other hand, wasn't, and the Lady Badgers' shot at an elusive softball state title was wiped out.

The 26th in a series recognizing some of the state’s best spring high school athletes who had their seasons canceled by the coronavirus pandemic.

"Oh my goodness, we all felt we had a very good chance at getting [a championship] this year, especially with all that we had back," senior shortstop Hannah Gammill said. "We'd grown as a team, as a family, the friendships had grown, and we had a lot of maturity. I really think we had everything we needed.

"So we thought that this was kind of going to be our year, and we wanted to go out with a bang."

Instead, the coronavirus pandemic made all spring sports go out with a whimper.

The Lady Badgers finished a game behind Greenwood and Greenbrier in the 5A-West last year but crushed their first four opponents this season by a combined 51-5. They also knocked off Class 6A heavyweight Bryant on March 10, 7-6, in what turned out to be their final game.

"It seemed like they were really putting it together," said Beebe Coach Eric Chambers, who has guided the Lady Badgers to the state tournament every year since he took over in 2009. "I had seven seniors, all starters, and things were going really good. I also had a couple of younger kids that were gonna help us, too.

"We'd played those five games and were 5-0. They were playing well. Everyone seemed to had bought in, and we were all on the same page."

Gammill, a University of Arkansas signee who delivered a monster junior season, has been a catalyst for the Lady Badgers for a while.

Last season, she recorded team highs in hitting (.500), hits (29), RBI (37) and runs scored (32). She also paced the Lady Badgers in home runs with nine, including one during a 19-2 blowout of Sylvan Hills in the first round of last year's Class 5A state tournament.

"She's just a tremendous athlete," Chambers said of Gammill, who also was a key contributor on the volleyball team. "I mean, she's good at every sport she's played in. She's very strong and athletic.

"When you have that natural talent, you can turn that into some skill, and that's what she's done. She's probably a natural catcher, and she played that her freshman year before we moved her to shortstop. She's that good of a talent."

Gammill -- who garnered all-conference honorable mention honors after averaging 9 points, 6.3 rebounds and 2 steals per game for the Lady Badgers basketball team as a sophomore -- was on her way to another stout season as a senior. She was hitting .583 and had an on-base percentage of .750 in five games. She already had matched her stolen bases (4) from last season, and had scored 13 runs.

She said the team had confidence against the two teams that finished ahead of the Lady Badgers in the 5A-West in 2019.

"We beat Greenwood in a doubleheader at Arkansas Tech last year in two close games," Gammill said. "Unfortunately, we'd fallen to Greenbrier for the past couple of years, but we had all of our hitters back, our pitcher and even had a new pitcher that was gonna help us out. So we expected to definitely compete in the conference and be able to hopefully get a one or two seed for the state tournament.

"Of course, we knew it was gonna be tough no matter what, especially with those two teams as well as Vilonia all being really good."

Beebe also was set to play defending Class 6A champion Cabot and reigning Class 5A titlist Sheridan in April, which were strategic matchups to test the team's mettle. But those challenges never materialized

"It was a pretty disappointing time for us," Chambers said. "For me, it was frustrating more than anything. I thought that we might actually get over the hump this year. But I told them, and I hate saying this cliche, 'It is what it is,' and don't dwell on what could've been because it's never gonna be.

"The thing about it is that this crop of kids that didn't get to play, they were probably the most loaded groups we've had in years, and I'm not just talking about my kids. I'm talking about teams throughout the state. Everybody was loaded, and it was just gonna be a dogfight for everything. Everyone was going to be good."

Gammill won't get the state championship she wanted, but she's aiming to make up for that with the Razorbacks. The Arkansas softball team is on the rise under Coach Courtney Deifel. She's 147-106 during her five-year tenure, including four consecutive winning seasons. The Razorbacks were 19-6 and ranked in the Top 25 when their year was cut short.

"I don't expect it to be easy when I get [to Fayetteville]," Gammill said. "I've been working for the past couple of months since this whole thing has been going on, and I'm going to continue to work my hardest to see where it takes me. But again, I know it's not gonna come easy because there's a lot of good competition up there and a lot of good players.

"I just hope I'll be able to push my teammates and that they'll push me. By doing that, we'll hopefully be able to get to the Women's College World Series."

Chambers likes Gammill's chances once she joins the Razorbacks. But with the NCAA granting an extra year of eligibility to athletes who participate in spring sports, he's not sure when her time will come.

"Once she gets on the field, she'll be fine," he said. "She's going into the best league in the world, and she's gonna have to get adjusted to the speed and movement of that pitching. Those kids are throwing 80 and stuff in the SEC.

"But she's played top-level players, too. She'll do fine."