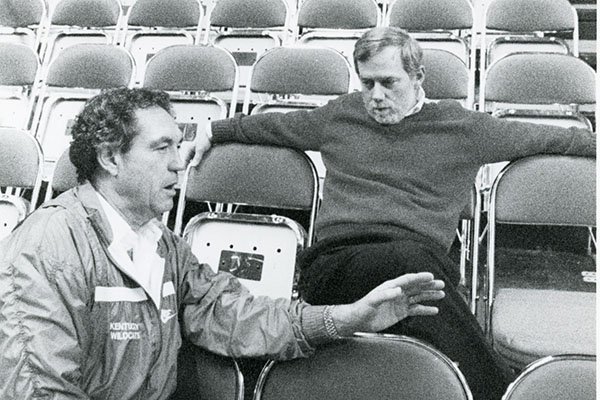 The word to describe Eddie Sutton was teacher.

At least that’s what every player from Rex Chapman at Kentucky to The Triplets, Joe Kleine, Darrell Walker at Arkansas, and a host of players from Oklahoma State said.

He was a great teacher of basketball and life.

That was his career, his calling, teaching basketball. No one has ever done a better job of teaching the game.

He also taught Arkansas Razorback fans to love the game.

Sutton could take his team and beat yours, switch teams and win again.

Sutton died Saturday in Tulsa. He was beloved in Oklahoma and Arkansas.

It has been 35 years since Sutton left behind the program he created to take over at legendary Kentucky. Although the Wildcats are a storied program, most Arkansas Razorback fans were not happy about his decision.

In a short time, they embraced Nolan Richardson, who built a trophy tower on the foundation Sutton had laid.

It took a while for the fans to forgive Sutton for saying he would have crawled to Kentucky. Sutton later said that shot was at athletic director Frank Broyles. Over time, that comment and any personal issues Sutton had during his time at the University of Arkansas were forgiven or forgotten.

At the time of his departure, your scribe took it more personally than what was initially realized.

On the Monday night of the national championship game in Lexington, Ky., when Villanova shocked Georgetown on April Fool’s Day, Sutton walked by press row before the game.

He stopped, we chatted, and he asked what time my flight was the next day.

After arriving home and getting in my car, the radio station cut to the live news conference of Sutton accepting the job at Kentucky.

If only he had told me, I would have changed my flight. You could do that without hassle back then.

Sutton’s last year at Arkansas had been one of peaks and valleys, from Hong Kong and Japan to Hawaii and Salt Lake City.

Sutton and Broyles were on the outs concerning Sutton’s battle with the bottle, which is one of the main reasons he took the Kentucky job.

A year later in Birmingham, Ala., I ran into Sutton at the NCAA Tournament. He took me by the arm and led me into the Wildcats’ dinner to introduce me to the team. He said some really nice things.

All was forgiven and forgotten.

We stayed in touch over the years. When he was having success at Oklahoma State, our paths crossed at another NCAA Tournament, this time at the one-hour shoot-around before the game.

Sutton led me across the court and sat me down next to him.

That night, sportscasts from all over Oklahoma were asking, “Who was that sitting with Coach Sutton.”

He made up for not giving me a heads up the night before he took the Kentucky job.

Sutton was a man of principles. He grew up poor and never forgot about his humble upbringing. He was always proud that his family tree had roots in Arkansas.

He touched the lives of countless young men, many of whom followed his footsteps into coaching.

He always had time for his former players, whether they were walk-ons or NBA mainstays.

Sutton had a tight circle of nonplayers, and all of those respected his need for family privacy.

Sutton was a teacher, and for those who knew him and that he trusted, he was a friend.

His legacy will be long lasting thanks to the lives he touched on and off the court.