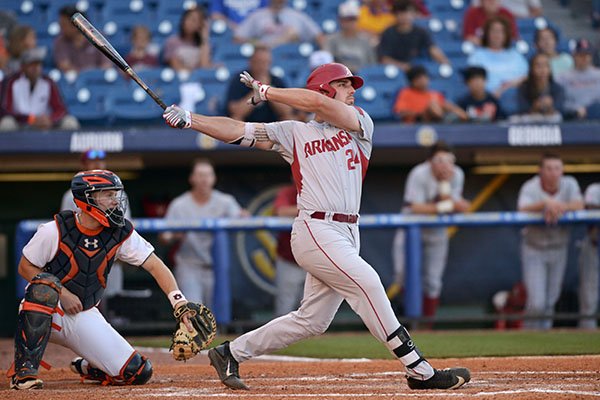 Arkansas first baseman Chad Spanberger hits a home run during a game against Auburn on Thursday, May 25, 2017, at the SEC Tournament in Hoover, Ala.

FAYETTEVILLE -- Chad Spanberger remembers it as "crazy" days, that four-day span during this week three years ago.

The University of Arkansas' run at the SEC Tournament, when the Razorbacks played five games in four days in Hoover, Ala., and nearly claimed the school's first SEC postseason title, was all that and more for Spanberger and the Hogs.

The 2017 Razorbacks had something to prove after failing to qualify for the postseason the year before. That had been the only year without a postseason for Arkansas baseball since 2001 before the coronavirus pandemic wiped out this season.

The Razorbacks lost their SEC Tournament opener to Mississippi State 4-3 and fell to LSU 4-2 in the championship game in 2017.

The crazy got unleashed in between.

In succession, the Razorbacks pounded Auburn, Mississippi State and No. 1 Florida by a combined 37-2 behind a barrage of home runs, with a combined no-hitter and a pair of run-rule games thrown in.

"I mean, it was just a great feeling, really because of how it ended the year before," Coach Dave Van Horn said Tuesday while recalling the 2017 SEC Tournament. "I just remember we hit a lot of home runs, and we scored most of our runs by hitting home runs.

"The park played a little jumpier than normal. There were a lot of home runs in that tournament ... by everybody. I remember we had a combo no-hitter against Auburn, and Spanberger provided all the offense we needed with three home runs."

The Razorbacks combined for 10 home runs, tied for the second most in one SEC Tournament. Spanberger hit five home runs -- three in the 12-0 no-hitter against Auburn, and two more in a 16-0 trouncing of Florida -- and earned SEC Tournament MVP honors with a .421 batting average, 10 RBI and 8 extra-base his.

"We just kind of caught fire and kind of rode it until the end, which was awesome," Spanberger said. "There was a ton of home runs hit in the tournament. Our team, we were smoking the ball. It was kind of crazy to think back now about all that happened."

Spanberger tied Ole Miss' Michael Guerrero for second place in the SEC Tournament record book with the five home runs, one shy of the six hit by Ole Miss' Mike Templeton in 1977. His seven RBI in the run-rule no-hitter vs. Auburn was a single-game tournament record.

Arkansas shortstop Jax Biggers hit a tournament-record three triples and went 10 for 20 (.500) with 5 runs and 6 RBI, but he was left off the all-tournament team in favor of LSU's Kramer Robertson. Spanberger was joined on the all-tournament team by Arkansas designated hitter Luke Bonfield and left-hander pitcher Kacey Murphy, who threw a complete-game 2-hitter with nine strikeouts in the run-rule rout of the Gators. Hogs' Outfielder Eric Cole hit .409 with 2 home runs and 6 runs scored.

Dominic Taccolini, Matt Cronin and Josh Alberius combined for the no-hitter against Auburn.

Taccolini threw the first two innings, walking four Tigers and striking out none. Cronin worked the middle three innings and struck out six and walked three. Alberius finished up with the final two innings with one strikeout and no walks.

Spanberger, who had hit two home runs in an 8-0 win at Texas A&M in the regular-season finale the previous week, kept his power streak going at the tournament with all eight of his hits going for extra bases.

"It just kind of took off," Spanberger said. "It was weird. I found a new routine to do before the game that helped me get ready that [assistant coach Tony] Vitello helped me with, and it just stuck. I kept doing it every game."

The 6-3, 235-pounder, hitting in the 2 hole, homered in the first inning against Auburn, added a two-run shot behind Cole's single in the third inning, then smacked a grand slam in the six-run fourth as Arkansas put the game away.

"The first one against Auburn was a 2-0 fastball and he left it up," Spanberger recalled. "The second was a 1-0 changeup kind of in the exact same location. The third one was a curveball from the lefty [Andrew Mitchell]. I faced that lefty in midseason, and he threw me I think eight curveballs in five at-bats. I was thinking he'd throw another curveball on the second pitch, and he did.

"It was really more location that I shoot for for picking pitches out more than the type of pitch, just because I hit locations better than certain pitches."

Said Van Horn: "One of them hit hit on a breaking ball. He went down on one knee and hit it, just flipped it down the line. It was incredible."

Singer, a freshman right-hander who was taken with the No. 18 pick of the first round in the 2018 Major League Baseball Draft by the Kansas City Royals, allowed 7 hits and 2 walks and recorded only 3 outs. Spanberger hit a two-run shot after a Cole single in Arkansas' five-run first, then Cole and Spanberger hit back-to-back home runs in the three-run second inning off Singer.

"Yeah, we had his number," Van Horn said. "He had a good fastball, but he was tipping his pitches just a little bit. Guys were figuring it out. So we kind of got a little bit of an advantage there with some off-speed stuff.

"I remember looking at Coach Kevin O'Sullivan. He kind of gave me a funny look from the other dugout. He kind of threw his arms out to the side like, 'What in the world is going on here?' I just kind of gave him the same look back, like, 'I don't know.' Because we were just raking those first few innings and hitting homers.

"As a coach, very rarely do you hit somebody that good on that big a stage where you just kind of just watch and let them play. It's kind of fun."

LSU right-hander Eric Walker held the Razorbacks to a run on five hits and a walk over 7 2/3 innings in the final.

Arkansas scored a run in the ninth inning to make it 4-2, and LSU Coach Paul Mainieri chose to walk Spanberger, as the go-ahead run, with two outs to bring up Bonfield, who hit into a force play.

"I just thought to myself, he's in scoring position standing at home plate," Mainieri said at the time. "And if he wasn't hitting a home run, it seemed like he was hitting a double. I think Bonfield's a good player, don't get me wrong. I just think Spanberger is playing on another planet right now."

Said Van Horn: "We were just thinking the way things are going, the way we've been swinging, I just kept thinking we're going to split a gap here and maybe walk this thing off and it just didn't happen."

Van Horn said managing a team in the SEC Tournament is always a fine line between not overextending your roster the week before an NCAA regional while also trying to win.

"It was a great run by our team," he said. "My focus is obviously I want to win that championship. I haven't won it. ... But at the same time, we knew we were going to be in a regional, and we knew we were on the verge of maybe even hosting one the way we were finishing. And our RPI was really high because we were knocking off good teams at neutral sites. It just kept climbing."

The Razorbacks did secure a hosting role for an NCAA regional, leading to another memorable showdown in the final two games against Missouri State. Which is another story for another day.