State of the Hogs: To go or not to go 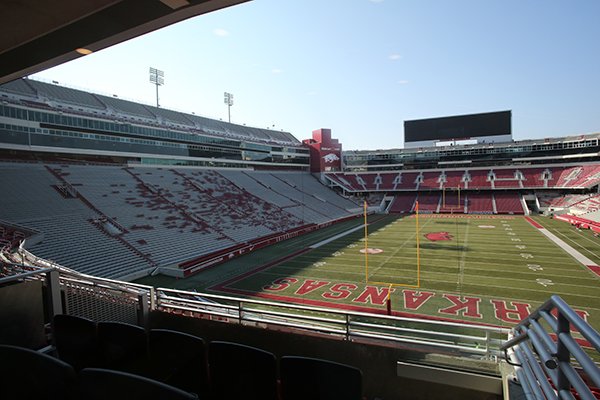 I lived in Tornado Alley for 14 years. There was a pole in the front yard of my Tulsa home with a siren. It seemed to blare once a week in the early 1990s.

The drill was simple: everyone piled into a middle hallway in our three-bedroom home and a mattress was pulled over our heads.

The first time we left home without a babysitter was one of the most horrific nights in Oklahoma history. Ten people died when a tornado hit just a few blocks from our home.

Our daughters were 11 and a few weeks short of 13. We left them that night because neighbors had begun to hire our oldest to babysit their children. We went out for a quick dinner.

When the sirens blew, we left the restaurant before the food arrived. I threw down $40 and we returned home, breaking the speed limit.

The siren had quit by the time we pulled into the driveway. We opened the door and there were our daughters in the hallway under the mattresses, just as they had been coached.

Sarah and Becca said in unison, “Is it safe to come out?”

We ask similar questions now concerning this covid-19 pandemic. Is it safe to go to a football game? The siren seems to still be blowing. Stay 6 feet away. Wash your hands. Don’t touch your eyes.

But as the contestants say on Family Feud over and over, "We are going to play."

I’ll be 66 before the Hogs play their first game under new coach Sam Pittman. Should I go? Is it safe? What will the press box be like?

I asked some of my favorite ex-Razorback players, many with season tickets, if they are going to games this fall. Will they be there as Pittman begins the task of restoring pride in the Arkansas football program?

“I’ll be there,” Loyd Phillips said. “I bought season tickets. I’m not going to throw them away.”

Phillips won the Outland Trophy in 1966 and was a sophomore starter at defensive tackle for the 1964 team that won the national Championship. Few played football as consistently well for the Razorbacks as Phillips.

Tough was his middle name. He didn’t pass on an opportunity for a fight at practice or in the dorm. And, no one blocked him on the field. He played in a rage, from sideline to sideline.

I’d want him by my side if I walked down a dark alley. I doubt he’s afraid of anyone anywhere. And, to make it clear in this invisible enemy, Phillips is alert when it comes to the virus, but not scared.

“Well, I’m going to be smart,” he said. “If they tell us to wear a mask to the game, I’ll wear one. I wear them when I go to Walmart. But I’m going to go to see Sam Pittman’s first game. I just am.”

“I’ve been hearing about Sam from Charlie for years because he coached him at Grove, Okla.,” Phillips said. “I have a lot of respect for Charlie. I know how he coached. I watched him at Rogers and I know Sam learned a lot of things about toughness from Charlie.

“So I’m excited. I think Nevada on Sept. 5 represents a good challenge for our team. They have quite a few returnees. I’ve looked at their roster and I think it will be a good game for us. I want to be there.”

Ken Hatfield was reached via text just after the phone conversation with Phillips. They were teammates in 1964.

Hatfield, who coached the Razorbacks from 1984-89, is on the College Football Playoff Selection Committee. You’d expect him to attend, too. He has season tickets.

“Planning on it, unless new info dictates otherwise.”

“Where I sit might be interesting. I might be in the corner of the upper deck on the top row. But I’m going to be in the stadium. I just don’t think I can miss a game.

“It’s scary. It is. I know I’m at risk because of my age. I just heard that (former Auburn coach) Pat Dye is in the hospital with covid-19. So that is real to me. He’s a former coach and he’s got it.

“I’ve talked to a lot of people my age that probably are not going to use their tickets with where it stands now, but just as many more are going to go. I think everyone is excited about the new staff and wants to see them get started.

“Of course a lot can change between now and Sept. 5, but I plan to see games that weekend.”

Horton has an eye on the Mizzou season opener. It’s against Central Arkansas, where Horton won a part of two NAIA national titles as head coach.

“You talk about feeling obligated to go to a game,” he said. “That is one I feel that way for sure.”

Not everyone feels such a strong pull. Jerry Welch, another 1964 captain along with Hatfield, won’t leave home. He’s on 10 acres outside of Hot Springs in the Ouachita Mountains.

“I don’t have a neighbor within one-half mile,” he said. “And, that’s good. I haven’t been away from home much in two months and it’s where I need to stay.

“I’m in all those high-risk categories. I’ve got a bad heart and I’m crippled. My wife won’t even let me go to the grocery store.

“I am in contact with a lot of people, but only by phone. I’m staying put and will just watch on TV. I can see it better and have learned how to run back plays over and over if I want to look for something like O-line play.”

“I’m so excited about the Sam Pittman era,” Welch said. “I’m more excited than I’ve been in a long time.

“I usually go to two, three or four games, but not this year. It’s getting harder and harder for me to walk up the hill with these knees, but this (virus) will keep me from doing it this year.”

It will also keep him from hugging an old teammate.

“That’s about right,” he said. “You see one of your buddies, you can’t even shake hands. I don’t know if I could do it. It’s just the way I am, but we don’t do that these days. We don’t hug our teammates. No one knows where anyone else has been.”

When the sirens stop, we will go back to hugging our teammates. But for now, some are still under the mattress.