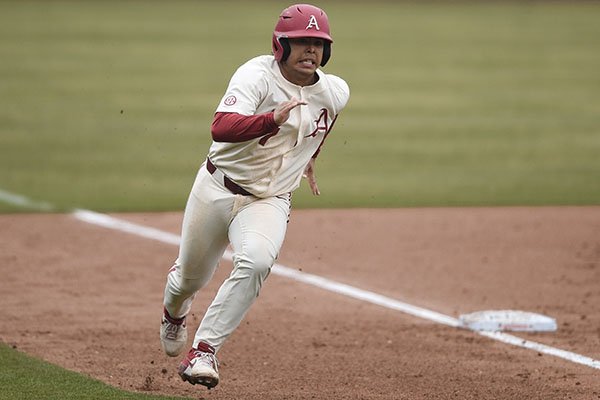 Arkansas catcher Dominic Tamez (7) runs toward home plate during a game against Gonzaga on Sunday, Feb. 23, 2020, in Fayetteville.

Tamez started twice and played in eight games during a shortened freshman season for the Razorbacks this year. He was 4-for-10 at the plate and scored three runs.

He struggled some defensively, notably during a midweek game against Illinois State on March 3 when he committed three passed balls in six innings.

Tamez, who signed with the Razorbacks out of Claudia Johnson Taylor High School in San Antonio, could have up to four years of eligibility remaining at his next school.

Tamez's departure comes after Arkansas signed a pair of graduate transfers at the position - Robert Emery of San Francisco and A.J. Lewis of Eastern Kentucky. The Razorbacks are also expected to return Cason Tollett, a freshman catcher who was injured for most of the 2020 season.

Casey Opitz, Arkansas' starting catcher the past two seasons, is considered a strong candidate to be taken during this year’s five-round MLB Draft.

Dylan Leach, a high school junior catcher from Carthage, Texas, has said he plans to enroll early and join the Razorbacks’ team for the 2021 season.

In addition to the two catchers, the Razorbacks have also added pitcher transfers Lael Lockhart from Houston and Issac Bracken from Northern Colorado.