Burlsworth camps to be held online 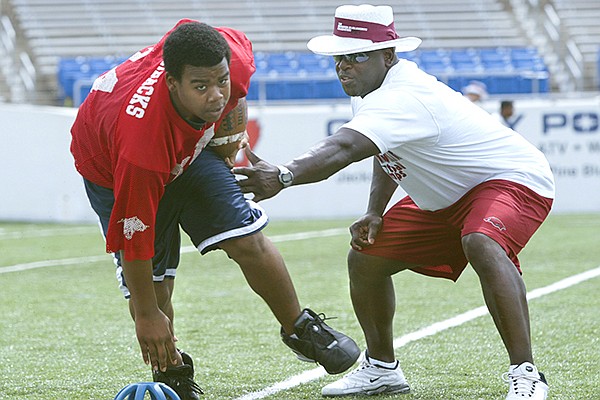 Former Arkansas running back Oscar Malon (right) works with Malcomb Watson of Brinkley while coaching at the Brandon Burlsworth Football Camp on Saturday, June 5, 2004, at War Memorial Stadium in Little Rock. The Burlsworth camps have been hosted each year since 2000 in Harrison and Little Rock, but will be moved to a virtual setting this year because of the covid-19 outbreak.

The Brandon Burlsworth Foundation will hold virtual football camps open to players of all ages for no charge, the foundation has announced.

The camps will begin Monday and run through Friday of next week, June 1-5.

Many of Brandon Burlsworth’s former University of Arkansas teammates as well as other former Razorbacks will provide instruction each day from 5:30 to 6 p.m. on a live stream.

“We look forward to these camps every year,” Marty Burlsworth, CEO of the foundation and older brother of Brandon Burlsworth, said in a news release. “Just as Brandon overcame obstacles to play Division I college football, we have found a way to make these camps happen even in the current environment we are in. None of this would be possible without the tireless efforts of our former Razorback players making it happen."

The Burlsworth football camps have been hosted each year since 2000 in Burlsworth's hometown of Harrison and in Little Rock.