UA’s lack of testing a concern for some 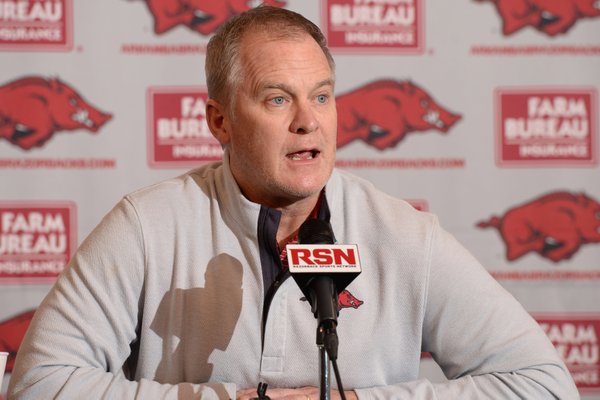 It was surprising and a little troubling to some.

The University of Arkansas is not going to test every football player for the coronavirus when he reports to campus this summer.

Only those who are symptomatic or coming from hot spots such as New York, New Jersey and Connecticut will be.

But they will be screened on a regular basis, which is what the NCAA, SEC and Centers for Disease Control and Prevention recommend.

For weeks, it was assumed every athlete at every school would be tested immediately.

What happens if Nevada calls Sept. 2 and says it has two players who have tested positive? Do the Wolf Pack still make the trip to Fayetteville for a game three days later?

Arkansas cannot insist that Nevada tests if the Razorbacks don’t, but a test can tell you whether you have the virus that day.

Nevada can screen players before they step on the plane, but no one has the time, money or man hours to test every day.

We are talking every athlete in every sport.

The University of Arkansas for Medical Sciences, which is part of the UA System, has been consulted and likes Athletic Director Hunter Yurachek’s plan.

Remember, Yurachek has a son on the Razorback football team. He wasn’t signing off on this unless he was sure it was the right way to go.

The immediate concern is football.

In less than 100 days, there will be no more 20 players to a room. A game can’t be played in a classroom.

On every play of every game, at least half of the players have physical contact. Football starts with blocking and tackling, which can’t be done virtually (although some might claim that’s already been happening with the Hogs the past couple of seasons).

Within minutes, they are sweating, breathing hard and in each other’s face.

Basketball is almost as bad, but that isn’t starting for several months.

Yurachek presented a good plan for getting the players back on campus, even spreading out the dates of return, but it didn’t include testing of the entire team. Some people sent emails and texts suggesting he was wrong.

They say it can’t just be about money.

There is no disputing that the athletic department is not bringing in the money it once did. Only 31,000 have signed up to renew their season tickets in a 76,000-seat football stadium.

Healthy attendance reports under Jeff Long now appear to have been doctored.

The decline in attendance is a nationwide concern, and no one seemed to realize the problem of having every game televised until it was too late.

A fan can buy a 65-inch TV with all the bells and whistles for about the same price as tickets and a weekend in Fayetteville.

Those weekends make for some great memories, but the TV is there for years to come.

It makes sense that money is a concern when it comes to the cost of testing thousands of athletes and coaches.

Covid-19 is still a problem and will be as long as people are testing positive daily. Even worse, people are dying from it worldwide.

Football players are young men who most likely would recover quickly from the virus, but how many other people would they come into contact with and how many of those people are not being monitored?

The people in the know suggest frequent screening, and for now that’s the procedure. Most likely it will be a UA system-wide effort.