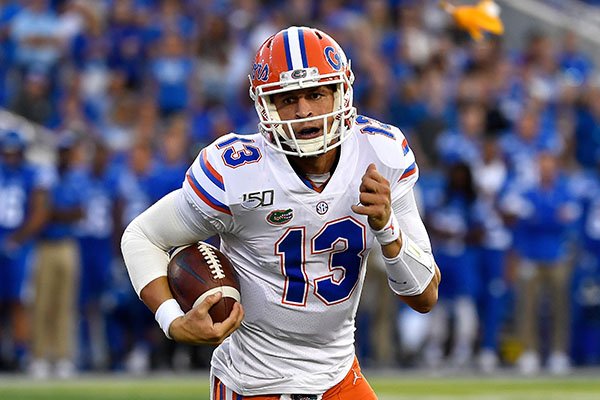 FAYETTEVILLE — The long layoff in competitive football must feel like ages for Feleipe Franks.

The graduate transfer quarterback for the University of Arkansas has not taken a competitive snap since suffering a broken ankle Sept. 14 as the starting quarterback at Florida.

Franks, 22, entered the transfer portal in December, signed with the Razorbacks for new coach Sam Pittman and his staff and settled into Fayetteville over the winter.

The 6-6, 235-pounder is essentially healed and overly eager to start firing footballs in the Kendal Briles offense. Franks, who started 24 games over three seasons at Florida, including all 13 as a redshirt sophomore in 2018, said style of offense was one of the biggest attractions to signing with Arkansas.

“I like the freedom about it,” Franks said earlier this spring. “It’s kind of what I’m used to. It’s kind of like what it was at Florida.

Franks will try to solidify a quarterback slot that was anything but stable during the two-year run of Coach Chad Morris and coordinator Joe Craddock. The Razorbacks used eight different quarterback starters the last two seasons, including a different starter in each of the last five games of 2019, the Hogs’ second 2-10 season in a row.

“When you go after guys that are graduate transfers, obviously you have to have people that are going to come in and hopefully help change your program for the better,” Briles said. “Feleipe, we feel like was one of those kids. He’s done it at a really high level, and he's been successful."

“Going through all our research on him, talking to different coaches and players that have known him, he’s a great kid, great locker room guy and extremely hard worker. So, he’s checked all the boxes for us, and he’s been great.”

The weird part for Briles is he hasn’t seen Franks take a competitive rep in person due to the coronavirus suspension.

“We just want to see him throw a football,” Briles said. “That’s the craziest thing, you know? I’ve been around him since January, and I haven’t seen him throw a football because we haven’t had the opportunity. … It’s kind of important to play that position, so we’d like to be able to see that.”

There’s plenty of tape available on Franks, a top signee in the class of 2016 who enrolled early for Coach Jim McElwain before redshirting that fall.

Franks made eight starts as a redshirt freshman in 2017, passing for 1,438 yards with 9 touchdowns and 8 interceptions as the Gators struggled to a 4-7 finish in McElwain’s final season.

Franks bloomed in 2018 under first-year coach Dan Mullen, leading Florida to a 10-3 record and a tie for No. 7 in the final Associated Press top 25 poll. He passed for 2,457 yards, with 24 touchdowns and 6 interceptions, rushed for 350 yards and 7 touchdowns, and finished the year on a streak of 135 consecutive passes without an interception. Among FBS quarterbacks with at least 315 passes, Franks ranked 14th with a 4-1 touchdown-to-interception ratio.

After Franks suffered his ankle injury during a 29-21 victory at Kentucky, classmate Kyle Trask took the starting reins and ran with them, leading the Gators to an 8-2 record the rest of the way.

“I think with him, he wanted to go some place he felt like he’d have a great opportunity to be the guy,” Pittman said. “You wouldn’t want to leave one place and go somewhere where you’re in the same boat as you were in the other place.

“We obviously played against him when I was at Georgia, and we knew his size and his arm strength, and how he can run and different things. It was a battle trying to get him here. But late in the process it ended up we were able to get him, and we needed him to be honest with you.”

Arkansas offensive line coach Brad Davis served in the same position on the Florida staff in 2017 and got to know Franks.

“I think he’ll be a fierce competitor,” Davis said. “I think he’l be a guy who will embrace his teammates. He’s an emotional kid. I don’t say that as a negative.

“I think he plays with passion. He’s emotional. He wants to win. He goes out there and he plays with his heart. He’s not a robot. I’m excited about it. I think he’s got great arm talent. I know he’s played a lot of football in this league. He’s played with and against some very good competition.

“I think he fills an immediate need that we have to bring some leadership, an older guy, and some real true arm talent to our program. I’m excited about him, man. I think he’s a great kid.”

Davis described his relationship with Franks as “very, very good” off the field.

“He’s someone that’s been very important in my life,” Davis added. “I’m glad he’s here. I’m glad he can finish his journey here with us and I’m excited about what he can do for our program.”

Pittman said Franks and Jefferson would have been slotted to take reps with the top offensive units had spring drills started as scheduled on March 16.

“We recruited Feleipe for a reason and that’s because we think he can help our football program right now,” Pittman said. “Obviously he’ll have to earn that position. But him and/or KJ would have stepped up and taken the first reps of spring ball.”

Franks’ new teammates are vouching for his makeup.

“I think he’s a great guy,” sophomore wideout Trey Knox said. “I was there with him on his official … and we just chilled and I met his dad and it felt like they were great people. All in all, I think he’s a good dude.

“He’ll rip the ball out there. I mean, we’ve got a draft pick throwing a 94 mph fastball, so he should be able to rip it out there. He’s like 6-6 and he’s a big guy, but he can move for that size, which is what we need in this offense.”

Receiver Mike Woods said, “He’s a big dude and he can really throw the ball. As far as being a leader, I think he came in and did a good job. Guys respect him. He’s loud and he’s going to let guys know what’s up when he needs to let them know.”

Offensive tackle Dalton Wagner said the addition of Franks has been “like a puzzle piece” since Day 1.

“It’s kind of cool to see him back there, because of how big he is, being able to see over everybody,” Wagner said.

Franks called his path to Arkansas a crazy little journey.

“I think it was the right fit for me,” he said. “It was important for me to find somewhere that kind of felt like that next home, I guess. And somewhere that I felt like I could thrive, and I wouldn’t have as many distractions around me.

“Somewhere I could just thrive in the classroom as well as on the football field and get to my main goal, which is obviously playing on the next level. So I’ve got one year to do that. … I think that this was the right place to do it at. Just coming on my visit with Coach Briles and Coach Pittman, I liked the offense as well. On top of that I like the campus and the environment.”

Franks has stayed in Northwest Arkansas through much of the coronavirus lull and has managed to throw to Razorback receivers in small groups.

He said rather than trying to come in and act like a leader, he’s just trying to be himself.

“I’m going to come in and be supportive,” he said. “It’s a new team. I’m not from Arkansas. They’ve accepted me with open arms and I’m super grateful for that.”

Franks said it would’ve been easy for him to pick a transfer destination where the football program was already rolling.

“But who am I really helping there?” he asked rhetorically. “So, I decided to come to Arkansas. When I was at Florida, we went 4-7 and then go out and win 10 games and play in a New Year’s Six Bowl. It’s all about — and I’ve seen it first-hand — it’s the motivation. We have it on this team. It just takes that one spark, that one turnaround.

“Maybe it’s a different coaching staff, a change. I love being the underdog. I think that’s what makes me go harder each and every day to just prove more people wrong. I think that’s a good mentality for this team to have, as well. Just keep proving people wrong. All it takes is a flip of the switch and it will turn around quick.”