Pittman advises 'valuable' Catalon to slow down, wrap up 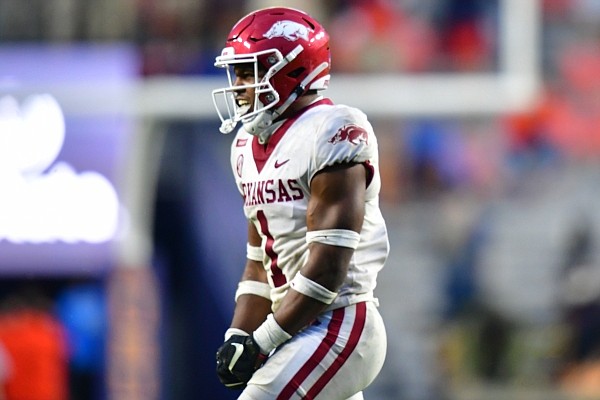 Arkansas safety Jalen Catalon reacts after a play on Oct. 10 against Auburn.

FAYETTEVILLE — Surrounded by defensive teammates and looking toward one of the video boards in Kyle Field, Jalen Catalon was in disbelief when he learned his Saturday night would be cut short.

The redshirt freshman safety was disqualified late in the first quarter against No. 8 Texas A&M after being penalized for targeting Aggies receiver Chase Lane at the end of a 15-yard reception. But before Catalon headed toward the sideline and his helmet was gathered by an equipment manager, Arkansas coach Sam Pittman provided a personal message and an encouraging pat on the back.

Pittman understood the call. He didn’t believe Catalon delivered a hit with malicious intent, but his safety’s head was down as he attempted to bring Lane to the ground.

“I just went up to him and talked to him,” Pittman added. “I said, 'Let's stay on the sideline and help the football team out.' He was devastated. Obviously, he loves to play and worked hard to play.

“(The defense) missed him. (He is) one of the best players we have and he's a leader back there. I'm sure our defense missed him.”

On the Aggies’ first snap with Catalon off the field, Ainias Smith sprinted up the middle of the Razorbacks’ defense for a 15-yard touchdown, eluding defensive backs Myles Slusher and Greg Brooks, and carrying Joe Foucha to the goal line.

In Catalon's absence, Slusher, a true freshman, whiffed on a chance to tackle Smith five yards downfield. He assumed Catalon’s place in the secondary.

“Losing Catalon the other night, it showed,” Pittman said Monday via Zoom. “We had certainly practiced without him and things of that nature, but he’s probably as important as anybody we have on the defense. He’s been playing really well.

“Just an unfortunate situation that he wasn’t able to play in the rest of the second quarter and the second half. He’s very valuable back there.”

Pittman noted the coaching staff learned a lesson in the loss about having another player at Catalon’s position ready to play. Slusher was battling an ankle injury leading into the game and coaches were unsure if he would be able to play.

Slusher finished with three tackles in the loss, and Simeon Blair, who also saw time at safety, added six tackles. The touchdown run by Smith was the first instance Catalon’s presence and physicality was missed. More followed.

Big hits from Catalon have occurred on nearly a weekly basis. Tone-setting type hits from the big-bodied safety against Georgia and Ole Miss certainly stand out. A jarring hit freed a would-be completion at Auburn, too. But he perhaps goes for the body blow too much for Pittman’s liking.

“He’s going to have to slow down and wrap up a little bit every now and then,” Pittman said. “He’ll miss some tackles that certainly he wanted to make. But you don’t want to take that physicality away from him because he’ll also kind of knock you out.

“We’d like to keep the knockout part and maybe wrap up a little bit more.”

Pittman reiterated, though, that Catalon — third on the team with 46 tackles, including a team-high 30 solos — is the most important player in the back end of the Razorbacks’ defense. He will play a vital role for Arkansas against Tennessee as it looks to win its second consecutive home game Saturday.

The Razorbacks have not won back-to-back SEC home games since 2016.

“He’s aware of what teams are doing because he watches a tremendous amount of film,” Pittman said. “So does the whole secondary back there, but very, very, very valuable to our football team as a young man and as a player.

“And so, obviously, you want to keep those guys on the field as much as you can.”