'He can do it all': Burks already one of SEC's best 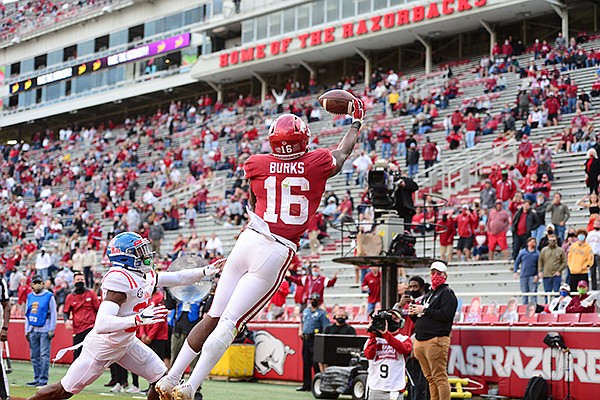 Arkansas receiver Treylon Burks (16) catches a touchdown pass during the fourth quarter of a game against Ole Miss on Saturday, Oct. 17, 2020, in Fayetteville.

The days of Pruitt chasing and pursuing a potential commitment from Burks still sit clearly in his mind. He envisioned a player who had an above-average shot at becoming a star and all of the gifts to blossom into a game-changing athlete — on either side of the football.

On Saturday, Burks will line up opposite of Pruitt when Arkansas meets Tennessee in Reynolds Razorback Stadium in a pivotal game for both sides.

As the coach predicted years ago, Burks has grown into a program-altering talent, and he has done so in a flash. Just a sophomore, the Razorbacks receiver is among the best players the Southeastern Conference has to offer, Pruitt said.

“Just looking at him, you see him improve every week,” Pruitt added on this week’s SEC coaches teleconference. “He's a mismatch guy. He’s probably 230 pounds, and he runs like a guy who is probably a 4.4 guy.

“I think he's got a chance to be a really, really good football player as the years go by.”

Teammates often find themselves in awe of Burks, both on the practice field and during games. The first 15 games of his career have been littered with electrifying punt returns, chunk plays and highlight-reel catches.

And at the midway point of this season, he is only three receptions and 109 yards shy of matching his freshman season totals. Burks leads the Razorbacks with four touchdowns as well.

“I mean, he makes catches that you see once every five years,” Arkansas tight end Hudson Henry said this week. “Sometimes in practice I’m like, ‘Dude, if we were playing in a game right now, (you would) be having five of the top 10 plays on ESPN.’

“He’s probably one of the best players I’ve ever seen on the field and been able to play with.”

Razorbacks coach Sam Pittman has been on the job for roughly 11 months and he has truly enjoyed having an opportunity to, among many other things, take in Burks’ personal and athletic growth firsthand. He agrees with Pruitt that his receiver should be in the conversation for best player in the league, not just at his position.

But Pittman finds himself most proud of the man Burks is becoming and the teammate he has proven to be. He is not a team captain this season but is cut from that cloth.

The coach could not even find it in him to be too upset with Burks after he revealed a nugget of injury information on social media — a violation of team policy — after the team’s win at Mississippi State.

“I really like him. I love him as a young man. Just a wonderful, wonderful hard-working kid,” Pittman added. “It’s been a lot of fun watching him.

“I think he’s a really good football player. To see some of the things he does, I mean, he’s an athlete. He can throw, he can catch, he can run. I imagine he’s a pretty good basketball player. He’s probably good at track or baseball — about anything he wants to be good at.”

In 2020, he has been at his best for Arkansas when healthy — or mostly healthy. In Burks’ three full games played, he has led the Razorbacks in receiving and surpassed the 100-yard mark.

Against Georgia and Texas A&M, both top-10 teams, he totaled 14 catches for 219 yards and three touchdowns. And in his first game back from a knee injury, Burks finished with career highs in catches (11) and receiving yards (137) in the 33-21 win over Ole Miss.

He picked up a career-best 114 yards after the catch and essentially sealed the game with the eventual No. 1 play on SportsCenter, all at approximately 80 percent.

“He’s talented. Big hands. You know he wears a 5X glove, whatever that is. That’s a big hand, I guess. He has good speed. (He is) a big wideout.”

There isn’t much Burks can’t do, Henry and running back Rakeem Boyd said. He has not completed either of his pass attempts this season, but he is more than capable.

“We all know that guy's a freak. He can do it all,” said Boyd, who tallied his first 100-yard rushing game of the season at Texas A&M. “You want him to play quarterback? He'd probably throw you a 50-yard pass. Running back, anything. He's an all-around player. We're glad to have him.”

Henry, who caught a career-high six passes against the Aggies, added that it is a formality Burks will play on Sundays.

“He is a phenomenal player.”