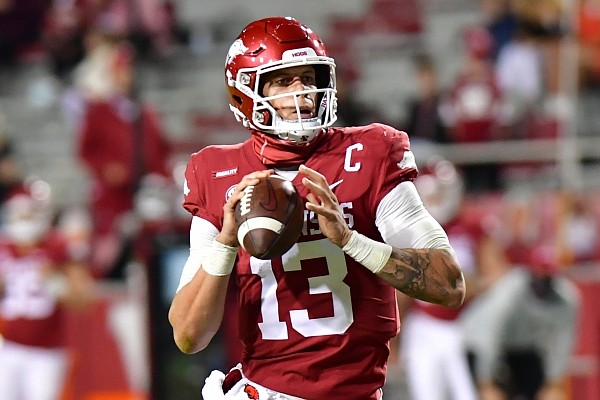 Arkansas quarterback Feleipe Franks looks to pass during a game against Tennessee on Nov. 7, 2020 in Fayetteville.

Below is an analysis of Arkansas quarterback Feleipe Franks' sixth start with the Razorbacks after a re-watch of the Tennessee game:

Best throw: The 59-yard touchdown pass to Treylon Burks in the third quarter. It was a great showcase of improvisation from both Feleipe Franks and Burks. Franks used his feet to buy more time in the pocket and remained calm with his eyes down the field in the face of a bit of pressure. Burks camped underneath the pass 41 yards downfield then cruised into the end zone.

Worst throw: Franks did not throw an egregious pass in this game. For a split second, he had a chance to hit Mike Woods for a touchdown in the second quarter but missed him and wound up sailing a pass out of the back of the end zone.

Interceptable throws: 0 (third game without one and has only two over the last five games)

Passes broken up: 0 (second game of the season without a PBU)

Analysis: Arkansas’ offense struggled in the first half Saturday against Tennessee, but the Razorbacks turned things around in impressive fashion. The third-quarter play of Feleipe Franks had a lot to do with that. The quarterback turned in his best performance at home this season, passing for 215 yards and three touchdowns. Franks finished the first half 6 of 9, but on Arkansas’ opening drive of the second half, he completed 7 of 9 passes.

For the third time in six games, Franks did not throw an interceptable pass. He has thrown only two in Arkansas’ last five games, and the two inaccurate passes against the Vols are his second fewest in an outing this season, behind only the Texas A&M game (1). Franks did fumble twice, but he was able to fall on one and right tackle Dalton Wagner recovered the other.

Franks continues to find a good deal of success on his deep throws. He hit 2 of 3 passes 16-plus yards at depth and they resulted in 115 yards and a score. He is now hitting such throws at a 52-percent clip, and five of those 13 completions have gone for touchdowns. Dating back to Texas A&M, Franks is 4 of 6 on 16-plus yard passes for 167 yards and two touchdowns.

"He throws the deep ball well. He really does," Arkansas coach Sam Pittman said Saturday. "He throws it with the right amount of speed. He can lob it, he can drill one and he’s got incredible strength with his arm. That’s what he does well. He’ll throw that little slant route well, too. He’s really good at throwing the deep ball, and he showed it again."

Franks was superb on third down. He threw for a first down on third down four times and he also moved the chains twice with his feet. There are certain aspects of Franks' play to clean up, namely securing the football a bit better, but his presence and leadership offensively has been outstanding. This is a big week for him as he prepares to head back to Florida. Pittman is certain, though, his quarterback will approach the game with the proper mindset.