Hogs' 24-point quarters have been few 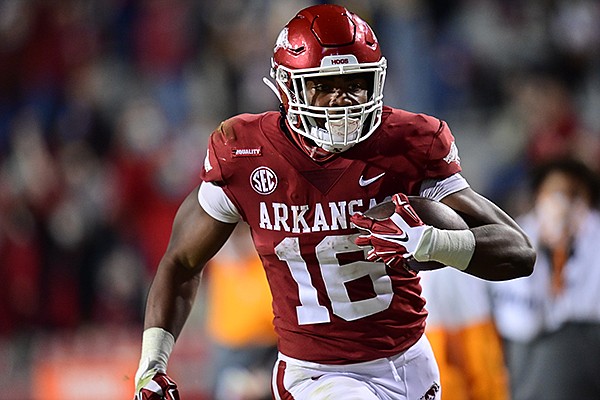 Arkansas receiver Treylon Burks runs for a touchdown during a game against Tennessee on Saturday, Nov. 7, 2020, in Fayetteville.

FAYETTEVILLE — Arkansas’ 24-point third quarter against Tennessee on Saturday was tied for the Razorbacks’ fourth-highest-scoring quarter in an SEC game.

It was the eighth time Arkansas scored 24 or more points in a quarter since joining the SEC, and was the first time since a 24-point second quarter during a 58-42 victory at Mississippi State in 2016.

Arkansas is 8-0 against SEC teams when scoring 24 or more points during a single quarter.

The Razorbacks’ highest-scoring quarter in SEC play came during a weather-shortened 49-7 victory over Kentucky in 2012. Arkansas scored 28 points in the first quarter of the game that was called in the third quarter due to tornado warnings in the Fayetteville area.

The Razorbacks’ other 24-point quarters came in back-to-back games against South Carolina in 1998 and 1999, and against Mississippi State in Little Rock in 2007.

Arkansas trailed Tennessee 13-0 at halftime Saturday, but scored on its first four possessions of the second half to take a 24-13 lead.

The Razorbacks began the third quarter with a 17-play, 75-yard drive that took 5:14 of game time, and mixed several three-and-out defensive stands with big offensive plays the rest of the quarter.

During Arkansas’ second drive of the quarter, a 56-yard pass to Mike Woods on the second play gave Arkansas a first-and-goal. Feleipe Franks threw a 6-yard touchdown pass to Blake Kern on the next play to put the Razorbacks ahead 14-13 following the extra point.

Arkansas scored on the second play of its next possession when Franks threw a 59-yard touchdown pass to Treylon Burks, which followed a 22-yard run by Trelon Smith on the first play of the drive. The Razorbacks’ final possession of the quarter concluded with a 48-yard field goal by A.J. Reed with seven seconds remaining.

Arkansas possessed the ball for 9 minutes, 47 seconds in the quarter. Tennessee’s offense ran only 10 plays for 11 yards.

The Volunteers have been outscored 61-7 in the third quarter of their past four games — all losses — against Georgia, Kentucky, Alabama and Arkansas.

The Razorbacks had been outscored 50-19 in the third quarter prior to Saturday.

Arkansas’ biggest quarters in SEC play have rarely come against teams the caliber of Tennessee, and until Saturday had all been during games the Razorbacks scored more than 40 points.