LSU unable to play week before scheduled trip to Arkansas 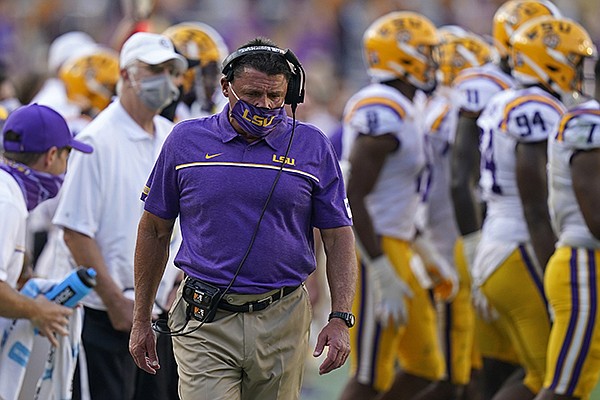 FAYETTEVILLE — LSU will have an additional week off before its scheduled game at Arkansas next week.

The Tigers' game against No. 1 Alabama scheduled for Saturday has been postponed due to covid-19-related quarantines within the LSU program. Tigers coach Ed Orgeron said Monday some players had tested positive for the virus.

In a statement, LSU athletics director Scott Woodward said the Tigers did not have enough scholarship players to play the home game against the Crimson Tide.

It has not been decided whether the LSU-Alabama game will be made up. The Tigers have already had another game against Florida postponed to Dec. 12.

With the postponement, LSU (2-3) will be off for the second consecutive weekend. The Tigers have not played since a 48-11 loss at Auburn on Oct. 31.

The Alabama-LSU game is one of three games called off this week due to the virus. The Auburn-Mississippi State and Tennessee-Texas A&M games have been rescheduled for Dec. 12.

Arkansas (3-3) is scheduled to play at No. 6 Florida on Saturday without head coach Sam Pittman, who received a second positive diagnosis for covid-19 on Tuesday. Defensive coordinator Barry Odom is serving as the Razorbacks' interim head coach.

The Arkansas-LSU game has been scheduled to kick off at 11 a.m. on Nov. 21 on either ESPN or SEC Network.