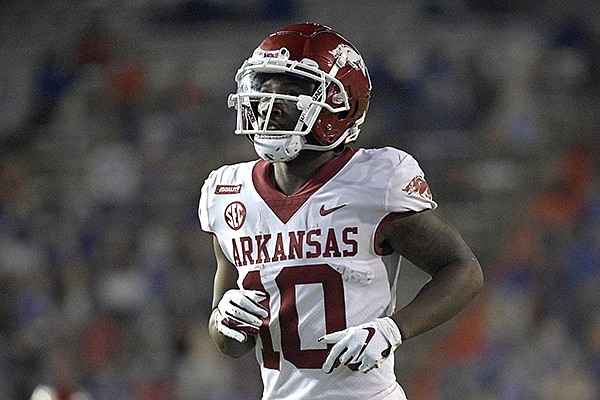 Arkansas wide receiver De'Vion Warren (10) sets up for a play during the second half of an NCAA college football game against Florida, Saturday, Nov. 14, 2020, in Gainesville, Fla. (AP Photo/Phelan M. Ebenhack)

FAYETTEVILLE — Arkansas receiver De'Vion Warren will miss the remainder of the season with an ACL injury.

Warren was injured while returning a kickoff during the fourth quarter of the Razorbacks' 63-35 loss at No. 6 Florida on Saturday.

"I hate it for him, but he has a good attitude about it," Arkansas coach Sam Pittman said Monday. "I feel terrible it happened."

Warren, a senior who is eligible to return in 2021, was in the midst of a breakout season on offense. He had 15 catches for 278 yards and three touchdowns.

On Oct. 10 at Auburn, Warren had five catches for 95 yards and two touchdowns. He also caught a touchdown pass during the Razorbacks' victory at Mississippi State the week before.

With Warren out of the lineup, Pittman said receivers Trey Knox and Tyson Morris will be called on to play more. Morris has backed up Warren this season and has five receptions for 47 yards, including a 1-yard touchdown catch at Texas A&M.

Knox has four receptions for 33 yards this season.

"Those guys will do well, no doubt in my mind," Pittman said.

Freshman Darin Turner will also move up the depth chart with the injury, Pittman said. Turner, a Memphis native, was a four-star prospect who signed with Arkansas over several notable programs after Pittman was hired last year.

"He's been in and out of some quarantines and some different things that has probably hurt his development," Pittman said.

Warren was one of at least four Razorbacks injured at Florida, but Pittman said safety Joe Foucha, linebacker Hayden Henry and tight end Blake Kern are expected to be available for Arkansas' schedule game this week against LSU.

Pittman said he is hopeful to get offensive linemen Beaux Limmer and Noah Gatlin, and tight end Hudson Henry back for the LSU game. All three players missed the Florida game.