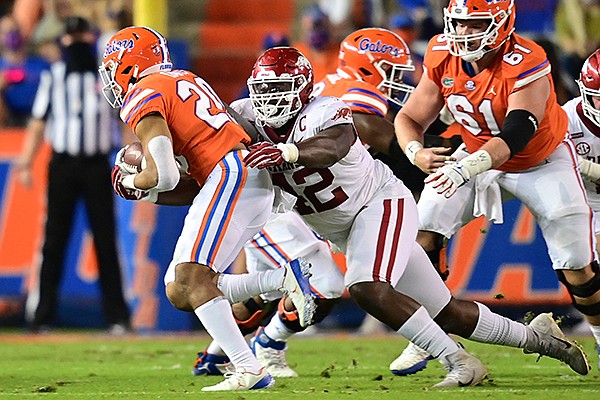 FAYETTEVILLE — Jonathan Marshall has been one of the most disruptive defensive players in the Southeastern Conference this season.

His motor and production at defensive tackle have lifted his chances of furthering his football career at the next level. In fact, Arkansas coach Sam Pittman has already spoken with multiple professional scouts about Marshall.

The Shepherd, Texas, native could be the next Razorbacks defender to earn his shot in the NFL. If Marshall is drafted in 2021, he would become the eighth Arkansas defensive lineman to be selected since 2014, joining the likes of McTelvin Agim (Denver Broncos) and Armon Watts (Minnesota Vikings), another player who flourished late in his college career.

“He’s played his way into a (draft-worthy) player, I believe,” Pittman said Monday. “And you’re not going to get a whole lot better kid than him if you take him on your football team, so absolutely. He’s had a really good year and I’m proud for him.

“I believe he will get looks in the NFL.”

Marshall, who entered 2020 with 35 career tackles and five for lost yardage, leads all Razorbacks defensive linemen with 26 tackles through seven games. He also has at least one tackle for loss in Arkansas’ last five games.

He is the only Razorbacks player with a full tackle for loss in more than three games. After five weeks, Marshall was second in the SEC in quarterback pressures with 22, according to Pro Football Focus.

In the eyes of Arkansas safety Jalen Catalon, no one is able to control the line of scrimmage quite like Marshall, who has been touted as the strongest player on the team for several seasons.

“He just causes havoc. Running backs have to cut back and do things because he's just such a weapon and such a distraction up there,” said Catalon, who recorded his fourth double-digit tackle performance of the season at Florida. “J-Marsh is doing his thing.”

Marshall finished the 63-35 loss to the Gators with three tackles, which may not seem like much, but 1.5 resulted in lost yardage. He totaled 4.5 tackles for loss in 2019, and he currently has 5.5 with three regular-season games to be played.

Eric Gregory, who has 22 tackles this season after finishing with only four in two games played as a true freshman in 2019, has enjoyed watching and learning from Marshall the last two years.

And they have quite a bit in common: quiet by nature off the field and productive when on it.

“That’s my guy. He does give great suggestions and stuff like that during a game,” Gregory said. “He brings a lot of momentum to the team and makes big plays and gets the D-line pumped up. Jon Marshall is a great person.

“He’s having an amazing season this year.”

At Florida, Marshall was Arkansas’ highest-graded defensive lineman, according to PFF, posting a mark of 69.7 while playing 66 of 85 snaps.

“I look up to him and a lot of the older guys,” Gregory said. ”I feel he’s a great leader to the team and the rest of the D-line.”