Isaiah Joe drafted by 76ers in 2nd round 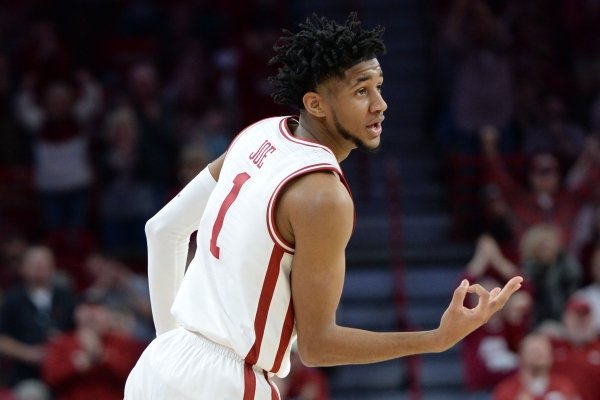 Arkansas guard Isaiah Joe (1) celebrates a 3-point basket Friday, Feb. 21, 2020, during the first half of play against Missouri in Bud Walton Arena in Fayetteville. Visit nwaonline.com/uabball/ for a gallery from the game.

FAYETTEVILLE — The Philadelphia 76ers have added one of the top shooters in this year’s draft class in former Arkansas guard Isaiah Joe.

“He can score. I think he is a good shooter,” ESPN college basketball analyst Jay Bilas said. “A little bit of a volume shooter. … He knows how to play fast.”

Joe is the seventh Arkansas player to be drafted since 2000, and this draft marks the first time since 2008-09 the Razorbacks have had players taken in consecutive drafts. Daniel Gafford was drafted in the second round by the Chicago Bulls last year.

Joe is the fifth Arkansas player to be drafted following his sophomore season.

Joe held a small watch party with family and friends at a fitness center owned by former Arkansas and NFL defensive end Steve Conley. Conley is the brother of Mike Conley, the former U.S. Olympic jumper who is Joe's agent.

Two-and-a-half weeks after announcing he would return to Arkansas for his junior season on Aug. 1, Joe changed his mind, opting to forgo his final two years of college eligibility and re-enter this year’s draft. He indicated his decision was influenced by college conferences calling off seasons in major sports.

“My announcement on Aug. 1 to return to school for another season as a Razorback was made with whole-hearted excitement and sincerity,” Joe wrote in mid-August in a post on his Twitter account, “but a lot has happened in a short period of time since then to increase the uncertainty that college sports will be played this season.”

A former standout and state champion at Fort Smith Northside, Joe averaged 15.2 points per game and shot 37.8% from 3-point range in two seasons with the Razorbacks. As a freshman, he set the program’s single-season record for 3-pointers made with 113 while shooting 41.4% beyond the arc.

Joe was named to the SEC All-Freshman Team after averaging 13.9 points and 1.5 steals per game.

Despite missing six games as a sophomore due to a knee injury that required arthroscopic surgery on Feb. 4, Joe made 94 3-pointers in 2019-20, including 31 on the left wing and 30 on the right wing.

In six games after returning from injury, Joe averaged 20 points, shot 39% from the floor, 34.9% from 3-point range and made all 34 free throw attempts.

He scored 16.9 points and grabbed 4.1 rebounds per game for the season.