Orange Beach has been good to Arkansas' McKeon 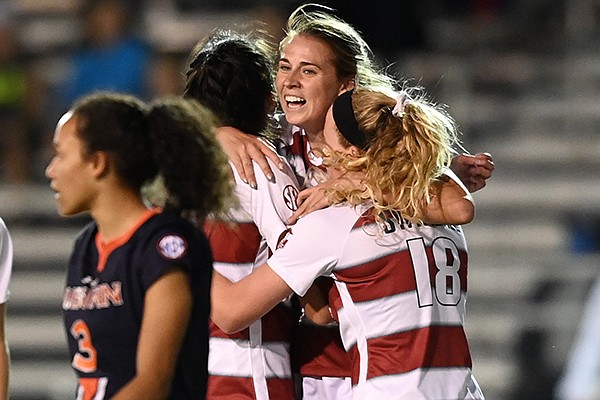 Photo by Eric Glemser, via SEC

Arkansas' Kayla McKeon (center) celebrates with teammates after scoring a goal during the first half of an SEC Tournament game against Auburn on Tuesday, Nov. 17, 2020, in Orange Beach, Ala.

FAYETTEVILLE — Arkansas midfielder Kayla McKeon has been named to the All-SEC Tournament team twice in her career.

The redshirt senior might be on her way to a third all-tournament selection following a two-goal performance in the Razorbacks’ 4-3 victory over Auburn on Tuesday. McKeon scored in the eighth and 22nd minutes following corner kicks — her third and fourth goals out of a set piece this year.

As a freshman in 2016, McKeon had an assist and scored on a penalty kick in the Razorbacks’ run to the championship game. As a junior in 2018 she had three assists in a 4-0 victory over Ole Miss, and kicked the game winner in overtime to down Florida in the semifinals.

WHAT No. 6 Arkansas vs. No. 10 South Carolina, SEC Tournament Semifinal

NOTEWORTHY With a victory the Razorbacks would become the first program to play in five consecutive SEC Tournament championship games since Florida won six consecutive tournaments from 1996-2001....Arkansas sophomore Anna Podojil was credited with two assists against Auburn to give her an SEC-leading seven this season. Podojil also has four goals and has scored 15 points this season….There have been a record-45 goals scored through the first 10 games of the tournament. The previous record was 39 scored during the 1997 tournament.

“I don’t know what’s in the water down here, but I guess I like it here,” McKeon said. “I think I just turn it into second gear. Being in Orange Beach and knowing it’s one and done, the pressure is on and everyone needs to step up. Especially being an older player, I feel like it’s my job to prepare the freshmen for what’s about to come and try to lead the team a little bit.”

McKeon will look to send top-seeded Arkansas back to the championship game Thursday when the Razorbacks face fourth-seeded South Carolina at 6 p.m. at the Orange Beach (Ala.) Sportsplex. Arkansas (8-1) is looking to advance to the championship round for the fifth consecutive season.

The Gamecocks (7-2) are the only team to defeat the Razorbacks this season. South Carolina’s Samantha Chang scored the go-ahead goal in the 71st minute to down Arkansas 2-1 on Oct. 16 at Razorback Field in Fayetteville.

“We’re 18-3-1 the last two years in the SEC, and all three losses are to South Carolina,” Arkansas coach Colby Hale said.

“We gave up two goals (in the first meeting this year) and you can’t do that against a good team. We outplayed them pretty much in every facet. We’ve just got to be better in the boxes.”

South Carolina was nearly in Arkansas’ spot in Orange Beach. The teams were tied atop the league standings entering the final day of the regular season, but the Gamecocks lost 1-0 at Tennessee.

That win gave the Volunteers the division title in the SEC East. Arkansas clinched the No. 1 overall seed with a victory the same night at Mississippi State.

The Razorbacks’ status as the team to beat in Orange Beach is different than when McKeon last played at the tournament in 2018. She required surgery on a broken ankle last year that forced her to miss Arkansas’ first SEC championship season.

McKeon has been a key contributor to the Razorbacks’ second title team. She earned second-team All-SEC during the regular season when she scored three goals and assisted on another.

Her two goals against Auburn gave her 27 in her career, which ranks sixth in program history.

“She’s been great this year,” said Anna Podojil, a sophomore forward who was voted first-team All-SEC. “Honestly, just her presence on the field, how she leads the team is such an impact. We really needed that voice, especially with her playing in the center midfield.

“She’s pretty much everywhere. She’s aggressive and works hard. She just communicates with everyone and is a great leader.”

Arkansas and South Carolina enter their matchup coming off similar games in the quarterfinals. The Razorbacks led Auburn 4-0 at halftime, but had to fight off a late rally to win 4-3. The Gamecocks led Missouri 3-0 in the second half and won 3-2.

Both teams are ranked in the top 10 of the United Soccer Coaches poll — Arkansas No. 6 and South Carolina No. 10.

The Razorbacks have defeated six teams ranked in the top 10 in the past five seasons.