Arkansas gets payback, advances to SEC Tournament championship for 5th year in a row 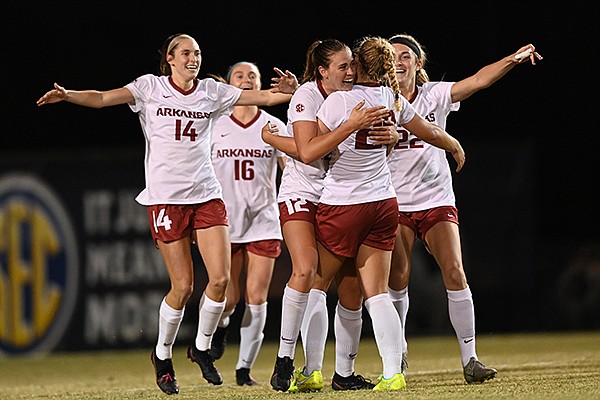 Arkansas players celebrate with freshman Emilee Hauser (facing opposite) after Hauser scored a goal during an SEC Tournament game against South Carolina on Thursday, Nov. 19, 2020, in Orange Beach, Ala.

Two days after rooting for South Carolina, Arkansas players eliminated the Gamecocks from the SEC Soccer Tournament on Thursday.

The No. 6 Razorbacks avenged their only loss of the season with a 2-1 victory over the No. 10 Gamecocks in the tournament semifinals at the Orange Beach (Ala.) Sportsplex.

The Commodores (7-4) scored two goals in the final 14 minutes to defeat No. 8 Texas A&M 3-1 in the second semifinal game Thursday. The Aggies split the SEC regular-season championship with the Razorbacks.

Arkansas, which has won the regular-season title two straight seasons, has never won a tournament title. It is the first program to play in the tournament championship game five consecutive seasons since Florida won six straight tournament titles from 1996-2001.

NOTEWORTHY Arkansas defeated South Carolina for the first time since a 1-0 victory over the top-seeded Gamecocks in the semifinals of the 2017 SEC Tournament….Arkansas redshirt senior Kayla McKeon assisted the goal by Emilee Hauser. It was McKeon’s fifth career assist in an SEC Tournament game. She also has scored four goals at the tournament, including two in the quarterfinal victory over Auburn on Tuesday….The Razorbacks improved to 11-3-1 at the tournament since 2016. Arkansas lost in penalty kicks to LSU in the 2018 championship game….The Razorbacks have won seven games in the past five seasons over teams ranked in the national top 10. Arkansas defeated then-No. 5 Texas A&M earlier this season.

UP NEXT Arkansas is scheduled to play Vanderbilt (7-4) in the SEC Tournament championship game Sunday at 1 p.m. in Orange Beach, Ala.

“I think they just love (the SEC Tournament) and they’re built for the postseason,” Arkansas coach Colby Hale said. “It’s a tough team.”

To get to this year’s final round, the Razorbacks had to break through against the only SEC team they have lost to the past two seasons. Arkansas had lost three one-goal decisions to South Carolina in the previous 13 months, including 1-0 in last year’s tournament final and 2-1 on Oct. 16 in Fayetteville.

But Arkansas' players wanted to play South Carolina and had openly rooted for the fourth-seeded Gamecocks to defeat Missouri in the quarterfinals.

“South Carolina is always a good competition and it was somebody we really wanted to play because they were our only loss this season, and the past few times we’ve played them we’ve lost,” Arkansas senior midfielder Taylor Malham said. “Getting to play them tonight and getting to beat them was something we’ve been looking forward to this whole season.”

Arkansas felt it had left goals on the field when it lost to South Carolina a month ago. Its goals Thursday came from unlikely sources.

Freshmen Carolina Brooks and Emilee Hauser scored their first career goals in the 44th and 53rd minutes, respectively, to put the Razorbacks ahead 2-0.

Brooks’ rebound from inside the box put Arkansas up 1-0 with 95 seconds remaining before halftime. Brooks took possession when Kaelee Van Gundy’s kick ricocheted off a South Carolina defender. With the goalkeeper defending the right post, Brooks fired it into the middle of the net from about seven yards away.

“After the first ball is hit in, we always talk about being ready for that second ball,” Malham said. “That’s exactly what we did.”

Hauser got a second-half start and extended Arkansas’ lead to 2-0 with a left-footed line drive from 20 yards away. Hauser, who is right footed, tucked her kick inside the left post, away from the outstretched arms of diving Carolina goalkeeper Heather Hinz.

“We see her as a defender...but that was a great goal tonight,” Hale said.

Hauser and Brooks rotated Thursday. Combined they had played only 187 minutes entering the game.

“In a normal year you get some run-in games — preseason and nonconference — and the freshmen can get some confidence,” Hale said. “They’re very talented players, but it just takes awhile for freshmen to get played in sometimes. Now they’re playing great. They’ve earned their playing time, they’re playing great and they proved us right tonight.”

South Carolina (7-3) scored its only goal in the 66th minute when Ranya Senhaji caught Arkansas goalkeeper Taylor Beitz out of position.

The Gamecocks were aggressive and kept the ball on the Arkansas side of the field for most of the final 10 minutes, but the Razorbacks’ back line allowed only one shot in the final 16 minutes — a soft liner by Lauren Chang that Beitz covered up with about 25 seconds remaining.

Beitz, who had four saves, had a few key moments early in the second half, notably a save falling down on a point-blank look from Ryan Gareis less than 40 seconds before Hauser’s goal to put the Razorbacks ahead 2-0.