Philly drafts Joe in 2nd round 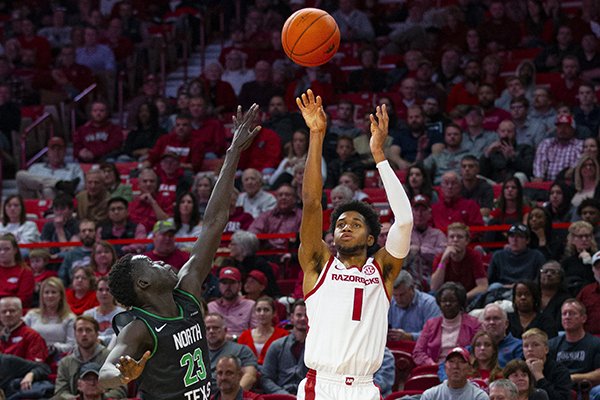 Arkansas' Isaiah Joe (1) shoots over the top of North Texas' Deng Geu during a game Tuesday, Nov. 12, 2019, in Fayetteville.

FAYETTEVILLE — Isaiah Joe is headed from Arkansas to Philadelphia.

The Philadelphia 76ers made Joe — who starred at Fort Smith Northside and the University of Arkansas — a second-round pick in Wednesday night’s NBA Draft.

After the 76ers selected Joe, he was shown on ESPN’s draft telecast hugging family members at a watch party at Conley Fitness in Fayetteville.

Mike Conley Sr., a former Arkansas track and field star, is Joe’s agent. Steve Conley, Mike Sr.’s brother and a former Arkansas and NFL defensive lineman, owns the fitness center and trained Joe, who also has been working out with Mike Conley Jr., a 13-year NBA veteran who plays for the Utah Jazz.

When new Philadelphia Coach Doc Rivers was an assistant coach with Orlando, Arkansas Coach Eric Musselman also was on the Magic’s staff, so there is a connection between the Razorbacks and 76ers.

Former Razorback 6-5 guard Mason Jones, who entered the draft rather than return to Arkansas for his senior season, was not selected among the 60 picks.

“[Joe] can score, and he played in the backcourt with Mason Jones, who’s another big-time scorer,” ESPN draft analyst Jay Bilas said after Joe was picked. “I think Joe is a good shooter, a high-volume shooter. He and Jones competed for shots a lot, but he played in an uptempo system, so he knows how to play fast.”

Joe became the Razorbacks’ 21st player selected in the first two rounds of the draft since 1978, when Ron Brewer was a first-round selection of Portland.

Arkansas had a player drafted for the second consecutive year after forward Daniel Gafford was a second-round selection by Chicago in 2019 at No. 38 overall.

It’s the first time Arkansas has had players drafted in consecutive years since Sonny Weems in 2008 and Patrick Beverley in 2009 were second-round picks.

Joe played two seasons at Arkansas. In August, he decided to keep his name in the draft after initially withdrawing it.

Last season, Joe missed six games because of a right knee injury that required arthroscopic surgery, but he still led the SEC in three-point baskets with 94 in 275 attempts (34.2%) from the NCAA’s deeper line and averaged 16.9 points. He hit 81 of 91 free throws (89.0%).

Jones went undrafted despite averaging 22.0 points last season to lead the SEC. He was The Associated Press co-SEC Player of the Year long with Mississippi State forward Reggie Perry.

Perry, a former Arkansas commitment who changed his mind and signed with Mississippi State, left the Bulldogs after his sophomore season to enter the draft and was picked No. 57 by the Los Angeles Clippers.