Pittman back in office after several days away 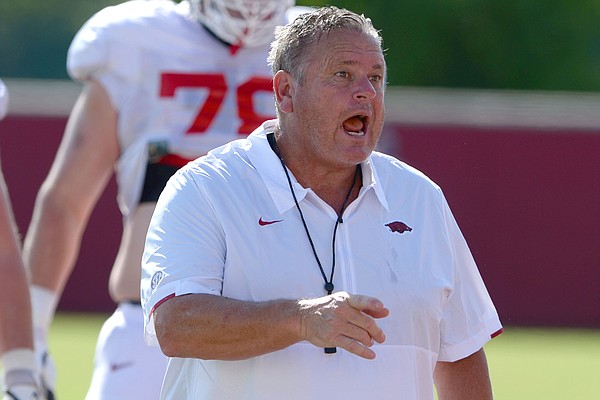 FAYETTEVILLE — University of Arkansas Coach Sam Pittman, speaking on the weekly SEC coaches teleconference, said he was excited to get back in the office Wednesday.

Yet as Pittman returned from his quarantine after a positive test for covid-19 early last week, he’s without a swath of players who got caught up in another bout of testing and tracing who are now in quarantine.

On Monday, Arkansas Athletic Director Hunter Yurachek said the Razorbacks’ number of available players for Saturday’s home game against LSU looked “great.” Pittman was asked about the coronavirus situation on the teleconference.

“Personally, I’m fine,” he said. “I feel good, and I’m glad to be back to work. We’ve had some [coronavirus] positives this week that certainly will affect our football team. But per numbers mandated by the SEC, we’re still within that number, ratio, so we’re looking forward to playing.”

Pittman was then asked whether he felt the Razorbacks had the adequate depth to deal with the players who will be out Saturday.

After a long pause, he replied tersely, “We’ve got an adequate number of people to play.”

“Obviously covid has spiked around the country, and it certainly has on the football teams in the SEC,” Pittman said. “It seems like we’ve gone back to — over half of our meeting time was about covid and who’s eligible and who can play. It seems like we’re spending a little bit more time on that now than what we did before. But you know it’s what life is right now.”

Coach Sam Pittman, speaking on his radio show Wednesday night, talked about how the Razorbacks must make improvements on third-down plays on both sides of the ball.

“I think that’s the biggest thing where we have to make another leap is we have to be able to convert third and 8s, third and 6s,” Pittman told host Chuck Barrett. “It’s easy to say, ‘Well, stay out of third and 8.’ Well, sometimes that’s hard to do.

Florida converted 9 of 12 third downs, a 75% conversion rate that was the highest among Arkansas’ opponents.

LSU Coach Ed Orgeron always reflects fondly on his two years at Arkansas, when he served as an assistant strength coach in 1986-87 for Coach Ken Hatfield.

“That’s a beautiful place up there,” Orgeron said Wednesday. “I spent two great years there. I love the place. My first Division I coaching job.

“I learned a lot under Ken Hatfield. I’m going to see him before the game. Fred Goldsmith, Dean Weber hired me up there. Just tremendous guys. They taught me how to be a football coach. So, I respect that school. I respect the Arkansas program.

“I’m glad to see Sam Pittman is bringing it back. Obviously, when I play them I’m not a fan. But, I’ve always been a fan of Arkansas. It’s a great place.”

The Razorbacks are tied for second nationally with three defensive touchdowns, one spot behind Troy, which has four scores on defense.

The Razorbacks are tied for second with SEC mates Alabama, Georgia and Kentucky, along with Army, Buffalo, Syracuse, Texas Tech, Tulane and Wake Forest. Arkansas, Kentucky and Wake Forest are the only three FBS teams with three interception return touchdowns.

LSU receiver Terrace Marshall called a players-only meeting Monday, and the normally reserved junior delivered a message he hopes resonates with the Tigers, who are 2-3 entering the second half of their season on Saturday at Arkansas.

“I just wanted to remind them that we’ve still got a mission ahead of us and we’ve gotta keeping playing and keep growing,” Marshall said. “Through all of the hard times with this covid stuff, we’ve gotta keep our eyes focused on the prize, and that’s to finish the season off the best way we can.”

“He gave us a great word in just continuing to thrive and just telling the younger guys that this isn’t over, we can still have our record be positive,” Cox said. “He brings a fiery edge to us. He doesn’t say much, but he’s a main leader on our team.”

Unexpected losses to Mississippi State and Missouri sidetracked the season early for the defending SEC and national champions, and the coronavirus also has toyed with the Tigers’ schedule.

“It’s definitely challenging with all of this outside stuff going on,” Marshall said. “All I can say is we just gotta keep our eyes straight and win the season out.”

LSU Coach Ed Orgeron reinstated 6-7, 327-pound offensive tackle Dare Rosenthal this week, which could be a huge benefit for the Tigers.

Rosenthal, the starting left tackle to open the season, had been serving an indefinite suspension since late October. Rosenthal had not played in LSU’s games against Vanderbilt and South Carolina before being suspended for the Tigers’ Halloween day loss at Auburn. He had logged 150 snaps in games against Mississippi State and Missouri in Weeks 1 and 3.

“He’s got to get into football shape,” said Orgeron, noting Rosenthal worked with the second team behind 6-6, 311-pound Cam Wire on Tuesday. “He looked pretty good. We’re going to have to make that decision on Friday. We’re not going to put him in if he’s not in shape, but it looked like he came back in pretty good shape.”

Rosenthal left school during the spring and did not participate in the two practice days of spring before the Tigers broke camp due to the pandemic.