Pittman hire was bolstered by his hiring of assistants 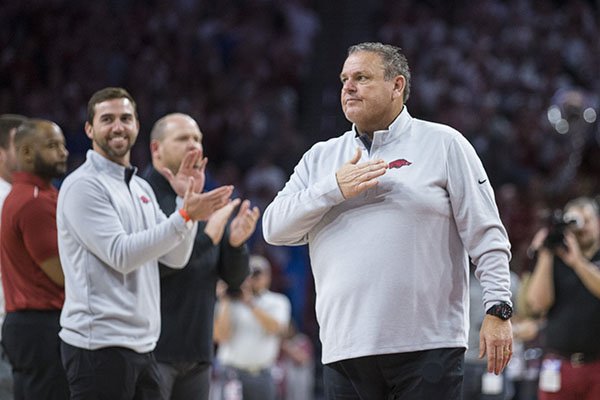 FAYETTEVILLE — Sam Pittman has earned heaping helpings of praise for getting University of Arkansas football off the deck from a 20-game SEC losing streak and back-to-back 2-10 seasons.

Pittman, whose Razorbacks (3-4) are scheduled to host LSU (2-3) on Saturday at 11 a.m., has deflected the praise toward his staff.

Pittman called LSU Coach Ed Orgeron on Monday to tell him how a longtime position coach like himself inspired guys such as Pittman to aim for the brass ring. Orgeron praised the work Pittman and his staff have done to lift the Razorbacks from the cellar.

“They play with great fundamentals. They play with energy, and this is going to be a big challenge for us to go on the road and beat Arkansas at home.”

Arkansas Athletic Director Hunter Yurachek has seen up close the interactions of Pittman with his staff, and then the way assistant coaches work with their position groups. He likes what he’s seen.

“Sam has done a number of incredible things since he arrived as our head football coach, but probably the No. 1 thing Sam Pittman did was he hired a great staff that complements him, complements his personality,” Yurachek said.

Pittman returned from his mandatory quarantine from a positive covid-19 test Wednesday and was happy to be back among the men and women who are rebuilding the Razorbacks brand.

“I think a big part of it was to get guys that treat people like I do,” Pittman said. “I mean, hopefully I treat folks the right way and with ultimate respect.

“I wanted guys around me that have that same mannerism about them, same respect for people, and also that goes back to the players as well. I think we did a good job. I think we have a great camaraderie in our building, and everybody wants everybody to have success. And it’s a lot of fun going to work.”

Pittman began building his staff by landing Odom — a longtime friend with whom he takes almost daily lunchtime walks — and a protege of his in offensive line coach Brad Davis, who had been on Odom’s staff at Missouri. Pittman coached Davis on the offensive line at Oklahoma and had him as a graduate assistant at North Carolina.

Kendal Briles cold-called Pittman to discuss the offensive coordinator role that he wound up landing out of a pool of three candidates.

They came from a short list of candidates he had compiled.

“Really, most of the guys we have here were the top ones on the list,” Pittman said.

Odom brought on board cornerbacks coach Sam Carter, who had also been at Missouri, to work with him in the secondary. Briles hired tight ends coach Jon Cooper. Pittman retained ace recruiter Justin Stepp from the previous Arkansas staff to coach the receivers, and the 10-man staff was complete.

Their synergy is one of the defining characteristics of the 2020 Razorbacks.

Added tailback Trelon Smith, “Man, this coaching staff is amazing. Not only do they do a good job of coaching us up on things, but they also do a good job of, if we need a look, like a real, actual look, they’ll even go out there and give us a look.

“I feel like these coaches, they’re just the best of the best when it comes to what they do. I just really love this coaching staff. They want to win just like us. With that being said, we’re all in this together.”

Last week, defensive end Zach Williams made a revealing statement that reflects on the positive vibes that come from the coaching staff.

“I feel like we’re just coached well,” Williams said. “It’s really the coaching. And when players like their coaches, they do a little bit more.”

“The confidence from our coaches instills confidence in our young men. You can just see our players just enjoy playing football again.”

Yurachek said the football coaches gave the department a big assist since the start of the coronavirus pandemic.

“Everybody who has a contract took a pay cut,” Yurachek said. “They did it voluntarily. They didn’t have to do that because they have a contract. I think that’s another testament to Sam and the staff he hired.

“Coach Pittman took the lead, and each of his assistants who signed contracts agreed to that. There wasn’t any pulling teeth. They understood the big picture. They understood what our department was going through, and they understood what the value of them taking a pay cut meant to our student-athletes and the success that they could have on the field.”

Yurachek thinks the Pittman staff is on the right course for big things.

“I think we have a couple of opportunities in the next couple of weeks to get a couple more wins. And that speaks volumes to the direction of where our program is. We’re not close to where we want to be, but we’re headed in the right direction.