Pittman: Hogs ‘running thin’ but on track to play LSU 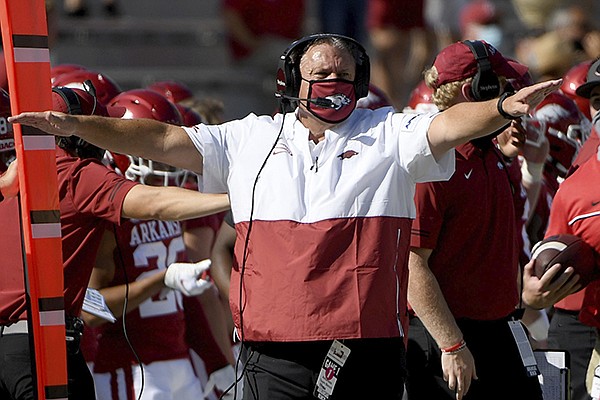 Arkansas football coach Sam Pittman is shown during a game against Georgia on Saturday, Sept. 26, 2020, in Fayetteville. (AP Photo/Michael Woods)

But the first-year coach added that two days from kickoff, Arkansas is in a position that would allow it to play the Tigers.

“I think everybody’s looking for an answer and I’ll give you the answer: We’re going to play Saturday, as of right now,” Pittman said via Zoom. “We’re going to play. We have a test that we took today that gets back (Friday). We want to play the game.

Pittman said there has been no discussion between Arkansas coaches and players about not playing the game.

“They want to play,” Pittman said, “so as long as our numbers will allow us to play, that’s what we’re going to do. Are we thin? Yes.”

He did not disclose who has tested positive or if others have been quarantined due to contact tracing. More than positive covid-19 cases, the SEC's contact tracing protocols have been viewed as the primary reason for several SEC games being postponed this season.

The Razorbacks have not had an interruption to their schedule this year. LSU has had two games postponed, including one scheduled for last week against No. 1 Alabama.