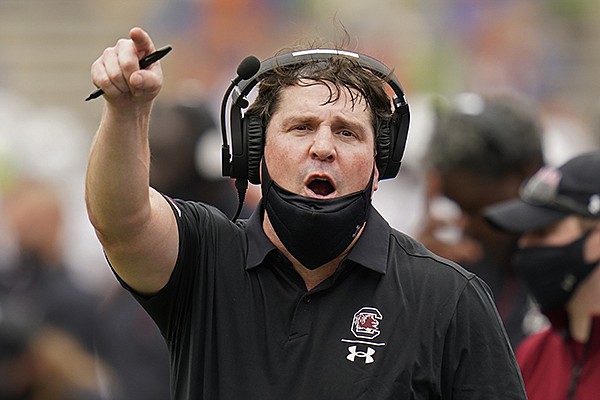 South Carolina head coach Will Muschamp has words with an official during the first half of an NCAA college football game against Florida, Saturday, Oct. 3, 2020, in Gainesville, Fla. (AP Photo/John Raoux)

South Carolina just fired a former Nick Saban assistant in Will Muschamp as its coach.

Would Gamecocks Athletic Director Ray Tanner hire another coach who was with Saban?

It seems possible with Louisiana-Lafayette Coach Billy Napier — who worked for Saban at Alabama as an offensive analyst in 2011 and wide receivers coach from 2013-16 — being mentioned by media outlets as a leading candidate for the South Carolina opening.

Steve Sarkisian — Alabama’s offensive coordinator and a former head coach at Washington and Southern California — also is considered a candidate for the South Carolina job.

“This is a very, very good job,” Tanner said. “Facility-wise, resource-wise, this is about as good as it gets compared to anybody in the country and in the SEC. There are some great opportunities ahead.”

Tanner did not specifically exclude the idea of hiring Freeze, who resigned under pressure at Ole Miss because of off-the-field issues and with the program in the midst of an NCAA investigation for rules violations.

“Nobody is ruled out,” Tanner said. “We will be looking at a long list of candidates. We will consider a lot of different people.”

Freeze undoubtedly would appeal to fans because of his 65-49 record at Ole Miss in five seasons from 2012-16 that included two victories over Alabama. The Rebels were a combined 19-7 in Freeze’s last two seasons, and played in the Peach Bowl and Sugar Bowl.

After sitting out two seasons, Freeze has a 16-5 record at Liberty. The Flames are 8-0 this season and ranked No. 21 in The Associated Press poll.

Freeze recently agreed to a contract extension at Liberty through 2025 with a raise from $2 million to $3 million, but that doesn’t mean he couldn’t be lured back to the SEC.

“Man, you know, the first thing is, I have no clue if anybody even wants me or not, except for Liberty,” Freeze told 247Sports on Monday. “And so I’m thankful for Liberty.”

Liberty, which has won road games at Syracuse 38-21 and Virginia Tech 38-35, plays at North Carolina State on Saturday.

“I know this, and my wife keeps me grounded on this, I live where my feet are and my total focus is on our team here getting them ready for NC State and building this program,” Freeze told 247Sports. “I’ve been honest with them and our administration here in saying that it would take something really, really special for me to even consider leaving here — and I mean that.

“I have no idea if anybody even would want to talk to me, and that’s OK, I’m at peace with that. So I’m happy right where I’m at and at total peace.”

Tennessee’s coaching staff is having a tough time on the field dealing with a four-game losing streak, and a story in the Knoxville News-Sentinel last week reporting eight assistants refused to take pay cuts to help ease the financial burden on the athletic department losing millions of dollars because of the coronavirus pandemic was a bad look off the field.

Vols Coach Jeremy Pruitt opened his Monday news conference by addressing the article and admitted that until reading it he didn’t know the extent of the pay cut refusals.

Pruitt said the article was factual, but the story ultimately might need to be updated.

“The situation is fluid,” Pruitt said. “I know the men that are in this building. I know where their heart’s at, and I also know the circumstances around decision-making and where they’re looking as far as where they’re going in the future. So all I can say is this — the final chapter has not been written on that.”

Pruitt didn’t technically take a pay cut in salary, but he declined a $400,000 raise he was scheduled to receive as part of a contract extension.

The only Tennessee assistants who agreed to take pay cuts were Tee Martin and Jay Graham, who both played for the Vols.

Tennessee offensive coordinator Jim Chaney, who had the same position at Arkansas, is making $1.6 million and was among the assistant coaches who refused a pay cut.

According to the News-Sentinel, the coaches were not obligated to take pay cuts — as were other athletic department employees — because they are under contract.

“[I got] a better understanding as to what is going on in our whole athletic department and what they were asking other people to do within our athletic department and making that sacrifice,” Martin said Monday at the Knoxville Quarterback Club, according to the News-Sentinel. “Ultimately, I thought it was the right thing to do.”

That’s three players above the SEC minimum of 53 scholarship players to play a game.

Now Drinkwitz and the Tigers will wait and keep their fingers crossed that when more tests are done this week that Missouri doesn’t fall below 53 available scholarship players.

If that happens, Missouri won’t be able to play for a second consecutive week after having its scheduled game against Georgia postponed.

“I don’t know what our final roster number will look like,” Drinkwitz said Tuesday. “We are committed to playing this week. We’ll do whatever we can in order to have that opportunity.”

Vanderbilt Coach Derek Mason led the Commodores to bowl appearances in 2016 and 2018, but the last two seasons have been a struggle.

The Commodores are 3-15 since the start of the 2019 season, and they’re 0-6 this season going into Saturday’s game against No. 6 Florida.

With a 27-53 record overall and 10-44 SEC mark in seven seasons at Vanderbilt, Mason has been on the coaching hot seat lists.

But Mason said this week he hasn’t had any discussions with Vanderbilt Chancellor Daniel Diermeier or Athletic Director Candice Storey Lee about his future.

“They know where I’m at, and I think at the end of the day, I’ve got a great relationship with Dr. Lee,” Mason said. “She’s been at most of our games this year. [Deputy Athletic Director] Tommy [McClelland] has traveled with us and got a chance to pull back the curtain a little bit and see what this year has had in store for us .

“I talked with Chancellor Diermeier at the beginning of the season, and obviously through covid continued to get updates on where we are. But right now I think they’re letting me do my job, and they understand week to week we’re going to put the best product out there that we can.

“I feel comfortable about how I continue to lead this team. We’re going to go week to week preparing. This week is Florida.”

Vanderbilt needs to beat either Florida, Tennessee, Georgia or Missouri to avoid it first winless season in SEC play since the Commodores were 0-8 in Mason’s first season in 2014.

Kentucky didn’t lose a yard on 35 rushing attempts and didn’t allow a quarterback sack in the Wildcats’ 38-35 victory over Vanderbilt last week.

Vanderbilt is the first team without a tackle for loss or sack in an SEC game since 2017, according to AL.com, when Missouri beat Florida 45-16.

The only other SEC game since 2000 in which a team didn’t have a lost yardage play, AL.com reported, was when Auburn beat Arkansas 56-3 in 2016.

That was back in 1984 when Saban was an assistant coach at Michigan State.

Stoops, like his brothers Bob and Mike, signed with Iowa and played for Coach Hayden Fry, a former Arkansas assistant coach.

“Cardinal Mooney High School was part of my recruiting area for a long time, and you know all the Stoops brothers came through there,” Saban said. “That’s where they went to school with their dad [Ron Stoops], who was a defensive coordinator there.

“Even though they all ended up at Iowa, we still tried to recruit them at Michigan State.”

“I’m kind of admitting,” Saban said, “I wasn’t a very good recruiter back in those days.”

The Gamecocks lost Marshawn Lloyd — one of the highest-rated freshman running backs in the country — to a season-ending knee injury in August, but Harris has emerged as one of the SEC’s best rushers.

Harris had 25 carries for 243 yards and a school-record 5 touchdowns — bigger numbers than he had all of last season — in South Carolina’s 59-42 loss at Ole Miss last week.

Two years ago Tennessee brought a losing record into Jordan-Hare Stadium and left with a 30-24 upset victory over No. 21 Auburn.

Tennessee quarterback Jarrett Guarantano, now a senior, had a big day at Auburn two years ago when he completed 21 of 32 passes for 328 yards and 2 touchdowns.

Guarantano suffered an apparent concussion at Arkansas two weeks ago, but he returned to practice this week after the Vols’ scheduled game against Texas A&M last Saturday was postponed.

$270,000 – Monthly payments South Carolina owes Will Muschamp over the next four years after firing him as coach. The total buyout is $13.2 million.

2013 – The most recent season Vanderbilt beat Florida 34-17 in Gainesville. It’s the only victory for the Commodores in their last 29 games against the Gators.

513 – Ole Miss record for passing yards by Matt Corral in last week’s 59-42 victory over South Carolina. Corral broke the mark of 489 passing yards by Shea Paterson against Tennessee-Martin in 2017.

“Everybody lights up the scoreboard now. The 10-7 games are a distant memory.”

– South Carolina Athletic Director Ray Tanner on hiring a coach which a background on offense.

“We only get 10 games this season, so you better be motivated for those opportunities and to go make plays. You shouldn’t need any more motivation than that.”

— Florida Coach Dan Mullen on the Gators not suffering a letdown against winless Vanderbilt.

“I’m real blessed and real honored, and I’m looking forward to be coaching the 100th game.”

“I have great admiration for what he does. You would be silly as a football coach not to look at some of the things he does and listen to him and see his approach and not try to grab a few things. You have to be yourself, you have to be authentic, but you are also stupid if you don’t look at some things.”