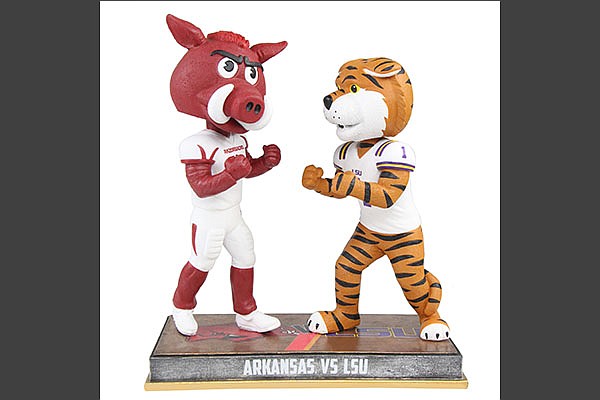 A bobblehead commemorating the Arkansas-LSU football game was unveiled by the National Bobblehead Hall of Fame and Museum.

FAYETTEVILLE — A bobblehead that showcases the Arkansas-LSU rivalry was unveiled Friday by the Milwaukee-based National Bobblehead Hall of Fame and Museum.

The bobblehead features likenesses of the schools' mascots — Arkansas' Big Red and LSU's Mike the Tiger — facing one another with their fists raised. The bobbleheads were manufactured by FOCO and are being sold in the museum's online store.

Arkansas-LSU is at least the eighth college football rivalry game to be commemorated by the museum. Other rivalry bobbleheads include Florida-Georgia, Oklahoma-Oklahoma State, Clemson-South Carolina, Louisville-Kentucky, Arizona-Arizona State, and Iowa games against Nebraska and Iowa State.

“The rivalry bobbleheads that we’ve released have been extremely popular and we think Arkansas and LSU fans will really enjoy this one," said Phil Sklar, the museum's CEO and co-founder.

Arkansas is scheduled to play LSU at 11 a.m. Saturday at Reynolds Razorback Stadium. The teams have played 65 times since 1901 and LSU leads the series 41-22-2.

Since 1996 the teams have played for the 175-pound Golden Boot trophy, a 24-karat outline of the geographical boundaries of Arkansas and LSU.