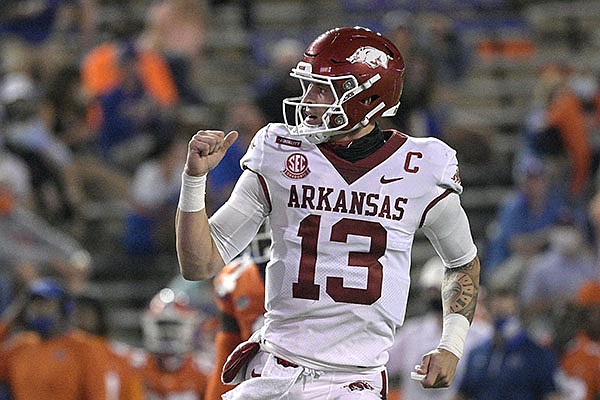 FAYETTEVILLE — LSU Coach Ed Orgeron saw a simple solution as to why the University of Arkansas Razorbacks are a more quality team now than they have been the last two years, starting with coaching and the addition of quarterback Feleipe Franks.

“Feleipe has made a difference, but they’ve got better players,” Orgeron said.

“Kendal Briles has done an outstanding job. They go hurry up. They’re one of the fastest teams we’ve seen on offense.

“I think Barry Odom, for the most part, has done a tremendous job on defense. You can see his schemes. You can see the fundamentals. … You know what? They have faith in their coaching staff. They’re getting love and they feel like they could be a good team. Give them credit.”

Arkansas quarterback Feleipe Franks hit his left hand on a helmet last Saturday and had to go to the locker room and put on a glove to finish up the game. The injury is not expected to slow the graduate transfer senior, who has 1,678 passing yards, a 16-3 touchdown-to-interception ratio and 68.3% completions that is on track to break the UA single-season record.

“I’m a big Feleipe Franks fan,” Coach Sam Pittman said Thursday. “I always have been. Whenever I was over at Georgia playing against him, he was a scary dude to play against, you know.”

Pittman said Franks should be ready to roll.

“No complications with that hand,” Pittman said. “He’s ready to go. Practiced every day this week.”

Pittman was asked if he felt good about not having any more players test positive or go in quarantine prior to Saturday’s 11 a.m. game against LSU.

“I don’t feel good about covid,” Pittman said. “I mean, I think everybody’s looking for an answer, and I’ll give you the answer: We’re going to play Saturday, as of right now. We’re going to play. We have a test that we took today that gets back tomorrow.”

The Razorbacks had at least two staff members and one player test positive for the coronavirus on Monday, according to a source with knowledge of the situation.

“We have not talked to our players one second about not playing the game because we want to play the game. They want to play, so as long as our numbers will allow us to play, that’s what we’re going to do. Are we thin? Yes.”

Knox had four catches through two games, but none since. The 6-5, 207-pounder was expected to have a larger role in the offense after catching 28 passes for 385 yards and 3 touchdowns last season.

“I can tell that he’s excited about this week,” Coach Sam Pittman said. “Anytime that you started and then you’re not necessarily starting, or playing as much as you would [like], that’s hard. That’s hard on a grown man.

“I’m very, very thankful of the way he handled it. I think he’s extremely excited about his opportunity this Saturday. … He showed a lot of maturity in this situation when it was dealt to him.”

Knox has 4 catches for 33 yards, while Morris has contributed 5 catches for 47 yards, including 1 touchdown.

The weather forecast for game day on Saturday is for a temperature around 64 degrees at kickoff with a 30% chance for rain at 11 a.m. and winds from the south at about 7 mph.

The temperature is expected to rise slightly to about 66 degrees by game’s end with a 40% probability of rain around noon.

Arkansas has 27 offensive plays of 20-plus yards this season after adding four plays to that count last Saturday at Florida.

The Razorbacks erupted for their two longest offensive plays of the season on Trelon Smith’s 83-yard touchdown run in the second quarter and Mike Woods’ 82-yard touchdown pass from Feleipe Franks in the fourth quarter. Woods also caught a 47-yard scoring pass in the first quarter, and Treylon Burks added a 25-yard non-scoring reception on the final play of the first half.

Arkansas has 20 pass plays of 20-plus yards and seven run plays of that distance or better.

LSU has 25 such plays, but only three on the ground, topped by Tyrion Davis Price’s 35-yard jaunt at South Carolina. He also has a pair of 24-yard runs, at Missouri and against South Carolina.

A reporter asked LSU Coach Ed Orgeron on Monday if it ticked him off when people insinuate that maybe the Tigers don’t want to play No. 1 Alabama and if they would be happy if the game, originally set for Nov. 14, wasn’t rescheduled.

“We look forward to rescheduling Alabama,” Orgeron said. “Whenever they tell us to play, we want to play. We wanted to play last week. We weren’t able to play because of the safety of our players.

“We have to put the safety of our players first. People will say things here and there that’s not true. … I love the rivalry. I grew up watching that rivalry. They’re a great football team, great challenge.”

The combined 98 points by Arkansas and Florida in last Saturday’s 63-35 win for the No. 6 Gators at Ben Hill Griffin Stadium in Gainesville, Fla. was the most combined scoring in a game for the Razorbacks in nearly four years.

Florida Coach Dan Mullen was involved in both games.

That marked the Razorbacks’ last victory over Mississippi State prior to this season’s 21-14 Arkansas win in Starkville over the No. 16 Bulldogs.

Ole Miss quarterback Matt Corral is having a banner year with 2,359 passing yards and 22 touchdowns.

However, there’s an anomaly in his game log this season, which features six of seven games with a pro quarterback rating of 92.8 or better, topped by a 97.6 in last week’s 59-42 win over South Carolina.

The only outlier? A head-scratching 7.0 rating in the Rebels’ 33-21 loss at Arkansas on Oct. 17. In that game, Corral threw six interceptions against the Razorbacks’ confounding zone schemes and completed a season-low 52.6% of his passes.

The Razorbacks might want to kick away from LSU return specialists Derek Stingley Jr., and Trey Palmer on Saturday.

Though the duo doesn’t have many returns, their explosive when they have the chance. Palmer averages 36.5 yards per kickoff return, including a 93-yard touchdown against South Carolina.

“Pretty much we need to kick it away from them or kick it out, one or the other,” Coach Sam Pittman said. “Because they have a great return team, and they took them back for touchdowns this year.

“They certainly have a lot of speed and they hit it. When they get it, they hit it downhill in the return game. It’s certainly a big challenge for us on Saturday and we have some ideas how to combat that as well.”

The Razorbacks are coming off their biggest time of possession deficit of the season, a 38:48 to 21:12 differential against Florida. Though the Razorbacks scored a season-high in their 63-35 loss, they had a pair of one-play touchdown drives, on Trelon Smith’s 83-yard run and Mike Woods’ 82-yard catch and run.

Earlier this season, Coach Sam Pittman said he didn’t expect the Razorbacks to be stout at ball control based on their up-tempo offense under coordinator Kendal Briles and that it wasn’t a critical statistic for Arkansas in his view.

The SEC Network crew assigned to call LSU at Arkansas will be comprised of Taylor Zarzour on play by play, former Georgia lineman Matt Stinchcomb as color analyst and Tera Talmadge as the sideline reporter.

Zarzour and Stinchcomb have worked two previous Arkansas games this season. Talmadge, a sports anchor for KNWA-TV in Northwest Arkansas, is working her fourth game as a TV sideline reporter.