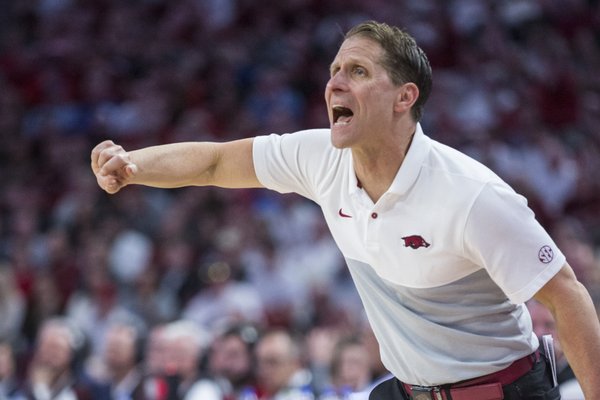 Eric Musselman, Arkansas head coach, reacts in the second half vs Kentucky Saturday, Jan. 18, 2020, at Bud Walton Arena in Fayetteville. The Razorbacks lost 73-66 to the Wildcats.

If 4-star junior guard JoJo Hunter doesn’t sign with the University of Arkansas, it won’t be because of the lack of communication.

Coach Eric Musselman, assistant Clay Moser, director of basketball operations Anthony Ruta and others on staff are in contact on a daily basis.

“It’s been great man, I mean before the offer we are talking at least twice a week, so once the offer came we started talking everyday,” said Hunter, who received his Razorback offer on June 22. “Not just Coach Muss, but everybody on the staff. Everybody at the school. It’s been welcoming for sure.”

He believes his and Musselman’s personalities are similar while calling the head Hog a “great man.”

“He’s a funny guy, he’s a real funny guy, man,” Hunter said. “We obviously get along with each other. Coach Muss always calls. He’ll for sure call at least once a week or text for sure multiple times a week.”

Arkansas is one of two schools which is reaching out to Hunter daily.

“Right now, really the only two that’s been talking every day is Arkansas and Arizona,” Hunter said.

Musselman and the staff aren’t always about basketball.

“It’s really them as people because, of course, they want to get you as a basketball player, but they’re trying to make men,” Hunter said. “Make sure you succeed after basketball. I would love a coach like that because I can’t dribble the ball forever. At one point, the ball stops.”

Hunter was named the league MVP as a sophomore after averaging 18.3 points, 8.8 rebounds and 6.1 assists a game while shooting 56% from the field and 71% from the free throw line.

Nothing But Net Magazine’s Van Coleman rates Hunter a 4-star prospect and the No 58 prospect in the nation for the 2022 class. Coleman said Hunter will crack his top 50 when he updates his rankings in a week or so.

“He has grown 2 inches since last spring,” Coleman said. “He has combo skills with size and quickness that points to the future. He has a quick first step and can create, drive or pass off the move and he can finish in traffic. His stock will continue to rise as [he] adds consistency to his perimeter [jumper].”

Arkansas has been doing research on Hunter by talking to his coaches, counselors and mother.

“Of course, I’m trying to go play where I know they want me, they love my game, but also I like how Arkansas gets to know me as a person, also not just on the basketball end,” Hunter said.

After talking to Musselman and his staff and learning more about the program, he has a good amount of interest in the Hogs.

“Right now, I love Arkansas,” Hunter said. “From how they carry things on the basketball end, to just the school because I’ve talked to their academic counselors that they bring to games. It’s just been a great relationship. A great one.”

“That’s who I’ll be on the FaceTime calls with during practice,” Hunter said. “I love their practices. I love what they’re about. You can tell there’s a lot of next level stuff. They’re continuously going from drill to drill. Not spending a whole bunch of time but just enough time on it so everybody understands it. I love what they’re doing.”

The abundance of NBA experience on the Arkansas staff has caught the eye of Hunter.

“They have a whole bunch of connects,” Hunter said. “They know a lot of people but they’ve also seen the next level, so they know what it takes. How to get you better. What you may need for the next level. Of course. when you’re a player in that environment that’s a huge advantage.”

The NCAA has extended the dead period to April 15, but once the ban is lifted, Hunter plans to make his way to Fayetteville.

“Oh, of course. Of course,” Hunter said. “For sure. That maybe the first place I go.”

His mother Monica Green has been preaching investing in real estate since his youth.

“Not just spend your money on materialistic things, but invest,” he said.

Hunter, who has a 3.2 grade point average, has learned that Northwest Arkansas is a good place to network in the real estate market.

“We’ve been talking about that at Arkansas how they have a whole bunch of people that can help in real estate and the business part of it,” he said.